Video footage sent by our viewers show thick black plumes of smoke visible from the highway.
KFSN
By Nic Garcia 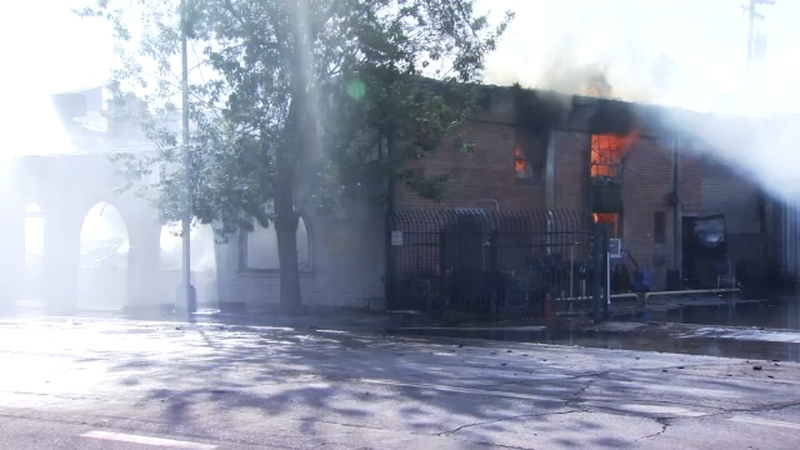 FRESNO, Calif. (KFSN) -- A large fire raging at a warehouse in central Fresno sent thick, black smoke into the skies on Sunday morning.

The fire was sparked at about 9 am and quickly burned through the La Tapatia tortilla chip factory on Belmont and Weber.

When firefighters arrived, the building that houses the factory was already engulfed in flames, and other businesses in the area were threatened.

"They were forced to aggressively protect the surrounding structures. The building that was on fire is going to be a total loss," Fresno Fire battalion chief Brad Driscoll said later.

La Tapatia is family-owned and has been based in Fresno for decades.

But the fire took just minutes to destroy the interior of the factory.

The age of the building and others in the area created a challenge for fire crews.

"Unsprinkler-ed buildings and just the age of the masonry construction makes it hard for us to get into the building," said Driscoll.

Due to the large size of the fire and its fast movement, firefighters had to focus on protecting the other buildings in the area.

"This absolutely had the potential to spread to other buildings, other warehouses and impact this business," said Driscoll.

Fire officials are still assessing the damage to La Tapatia and the equipment inside.

The family who owns La Tapatia posted a statement on social media, saying they are thankful nobody was injured and that the retail outlet will be open for business Monday morning.

They added that they're ready to continue operations.