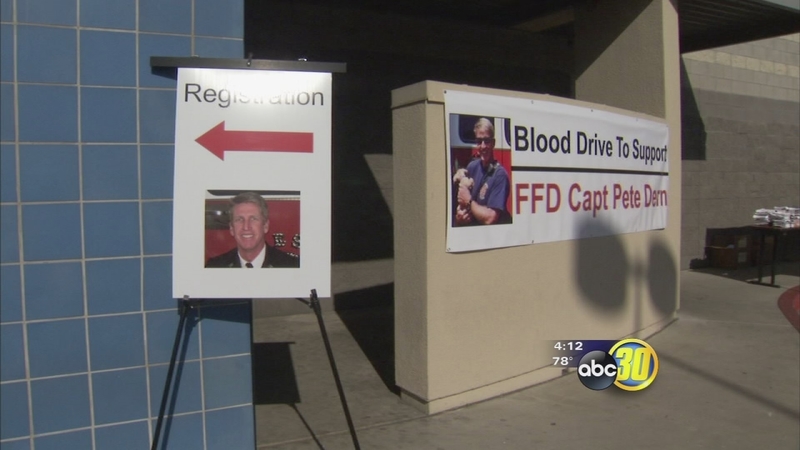 FRESNO, Calif. (KFSN) -- A Fresno fire captain severely burned in the line of duty is expected to undergo a second surgery on Monday.

Pete Dern was severely burned when he fell through the roof of a burning home this week. Doctors now say Dern was burned over 70 percent of his body and will have to receive skin grafts to repair many of those burns. Dern remains in critical condition, but the community is rallying together to help in his recovery.

In just moments, Dern's life was turned upside down after he fell through a burning building. While Dern recovers in the hospital, his colleagues and the community continue to rally behind him. On Friday, dozens turned out to donate at American Ambulance's blood drive.

"I know what my uncle went through fighting fires, and you stick together. Even though you don't know them, they're family," said Tammy Smith of Madera.

Smith is one of the many who's been touched by this tragedy. People who didn't even know the veteran firefighter came out, including 13-year-old Alejandro Esquivel, who is too young to donate.

"I convinced him to come here because it's good to give back to the people that give a lot to the community and save a lot of lives," said Esquivel.

He says Dern is a brave person and is thankful for what he does for our community. Fire officials say Dern is suffering from third-degree burns and has been in critical condition.

"He's going to have a lot of surgeries, and he's going to need a lot of blood. This is definitely going to help him and the community," said Pete Martinez, information officer for the Fresno Fire Department.

The Central California Blood Center says the donations come at a critical time.

"We have really struggled with O negs and some of our other blood types in general because usage in our emergency rooms for some reason has been so high for the last four or five weeks. So when this tragedy happened and then everybody responded, it's phenomenal," said Chris Sorensen with the Central California Blood Center.

Many emergency responders also rolled up their sleeves to help, including retired firefighter Michael Gill, who has been donating for years.

It's a lifesaving gift with an even greater purpose.

Dozens turned out at the American Ambulance blood drive on Friday. Several drives are planned next week, and you can always stop by the Central California Blood Center and donate.