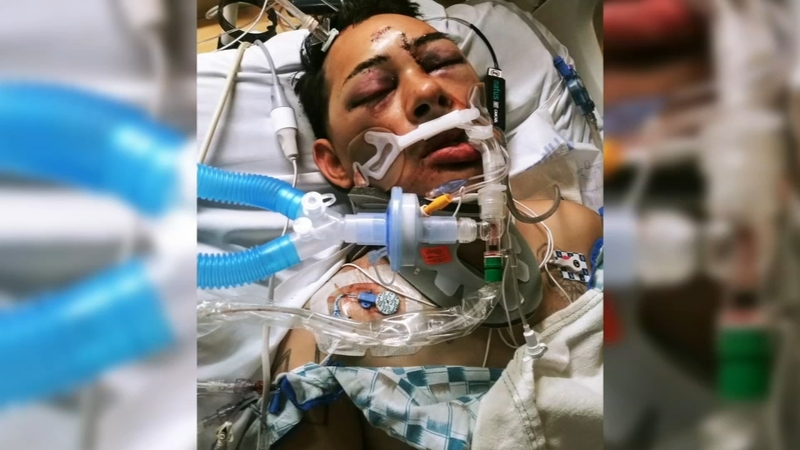 FRESNO, Calif. (KFSN) -- A father of four is fighting to recover after he was found laying on the side of the road in Central Fresno Saturday night with severe injuries and fractures from head to toe.

30-year-old Nicholas Archuleta is fighting to recover from the injuries he was left with Saturday night -- a fractured and bruised face, and fractured bones in his arm and both legs.

"He's got a lot of fractures on his face, his cheeks, his forehead," said his mother, Isabel Ramirez.

He was found laying on the side of the road along Olive Avenue in Central Fresno around 10 pm.

He laid there until a passerby found him and called out for help.

"If I knew them, I would thank them myself," said Ramirez. "If you are out there, thank you so much because you saved my son's life."

Emergency responders rushed Archuleta to CRMC, where he has now undergone three surgeries. Ramirez says his doctors are choosing to keep him sedated because they're concerned about brain swelling.

Now, she is left trying to piece together what happened to her son and why.

"Anybody out there that knows anything, please say something," she said. "It could have been your kid."

His mother says her son left his home near Palm and Normandie Ave. on foot at about 9:30 Saturday night. She says walking around town was something he did often because her son didn't drive.

Archuleta was headed to the house of a woman he'd been dating. But before he could get there, his mother believes he was hit by a vehicle.

"You hurt my son really, really bad," said Ramirez. "He has got four daughters that need him. It's not fair what you did to him."

Fresno Police says there's not enough evidence to prove a hit-and-run happened without witnesses, surveillance video or having spoken to Archuleta yet. But they aren't ruling at a hit-and-run out.

In meantime, Ramirez is hoping for answers while she and her four granddaughters pray that Archuleta recovers without further damage to his brain.

"They sent messages to my phone to play for him which I did today," she said. "They said, 'Dad I love you. I miss you. Don't stop fighting. Keep fighting for me.'"