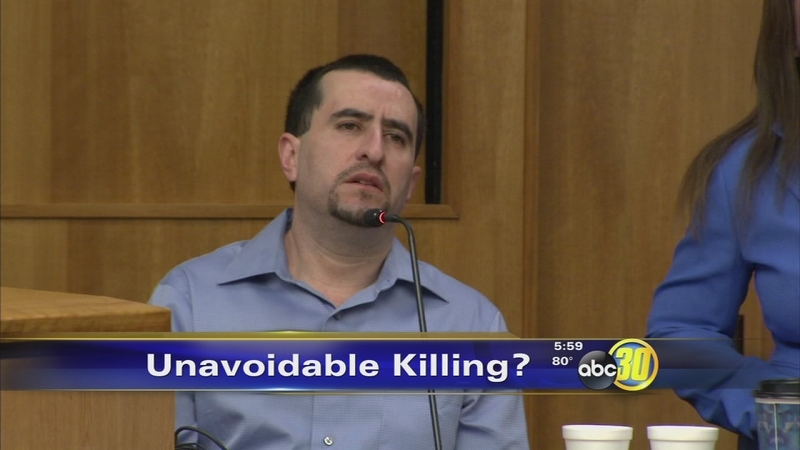 FRESNO, Calif. (KFSN) -- Drugs, cash, and family add up to murder charges, but the admitted killer says it was just something he had to do.

"Yes, I shot at him and he ran and I did not stop shooting," Cosmen Alvarez said.

It was a Christmas time killing at a Fresno hotel and the two suspects escaped to Los Angeles, with one admitting he was headed for Mexico. Alvarez doesn't deny killing Jose Santos Villa. He doesn't deny leaving town immediately afterwards. But he says everything he did, he did for the love of his family.

Cosmen Alvarez often looks to the sky as he answers questions about that fateful day. Just before Christmas 2013, Alvarez shot and killed a man at the Vagabond Inn in Southwest Fresno. He admits Jose Santos Villa once owed him more than $30,000 in cash -- mostly money for the 20 pounds of pot he says Santos took from him.

Prosecutors say at least some of the seven shots hit a defenseless, even face down, man.

"You went up to Jose [and he] was on the ground," said prosecutor Sam Dalesandro. "You stood over him with the gun extended outwards and it looked like you shot him twice on the ground."

Alvarez says the drug debt had been forgiven, but Santos had been threatening to kill his family in Madera. He says that's why he shot, and that's why he left town after the killing.

Alvarez admits pistol-whipping Santos' eight-months-pregnant girlfriend, and kicking the man's body when he was down. But he says that was only because of tales from Mexico about leaving your victim facing the ground.

"They would say that if somebody died face down the person who killed him couldn't leave there and his family members would kill him," Alvarez said.

Alvarez left town with his girlfriend, Yolanda Aviles, who stands accused of helping her boyfriend. Her attorney says Aviles was only at the Vagabond to help her daughter, the pregnant girlfriend. Police tracked down the couple about a week later in L.A.

Closing arguments in the trial are expected Wednesday. Both defendants face life in prison if they're convicted.