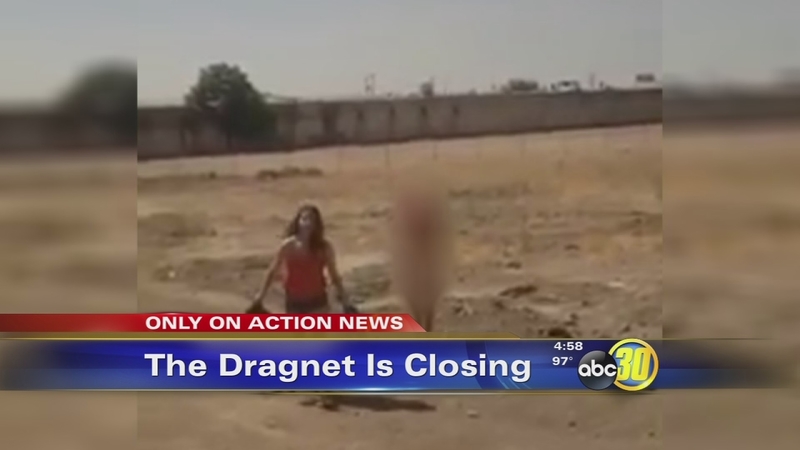 FRESNO, Calif. (KFSN) -- Fresno police have made a pair of arrests and have a suspect on the run after a disturbing attack caught on video in Central Fresno that was posted to social media.

Officers have chased dozens of tips since Action News first told you about the troubling attack and video earlier this week, but the one person they hadn't caught as of Wednesday evening should've already been in jail.

The peripheral players found themselves in police custody one by one. A man heard laughing in the viral attack video -- arrested in Central Fresno. A teenager caught at a home a couple miles west.

"The person we have arrested is a minor in this case and he's one of the subjects depicted in the video who's actually barking," said Fresno police Sgt. Paul Cervantes.

Police say three guys and a woman humiliated the 20-year-old victim on the streets of Central Fresno by robbing her, stripping her, and beating her. The humiliation only got worse when the attack made it onto Facebook for everyone to see.

Investigators say the chief culprit is the woman in the red tank top. She's known as "Baby Dreamer" on the streets, but in police records, she's just Destiny Rico, and a dragnet is closing in on her.

"We actually have our eyes on a certain location in the city of Fresno as we speak," Sgt. Cervantes said Wednesday evening.

Police say they know where to look for the 21-year-old and they'll catch her soon. They say she and the other players are all connected to gangs, so they responded quickly to make sure the violence didn't escalate.

"We want the citizens of Fresno to know they're safe in their neighborhoods and we're not going to tolerate that kind of violence," Sgt. Cervantes said.

Rico is just 21 years old, but already a convicted felon. In July, she was sentenced to 16 months in jail for burglary, auto theft, and receiving stolen property. Two months later, she was released under AB109, the prison realignment act, and because of overcrowding at the Fresno County jail.

Now, she's gotten a little internet celebrity, but if police catch her, she could end up in prison.