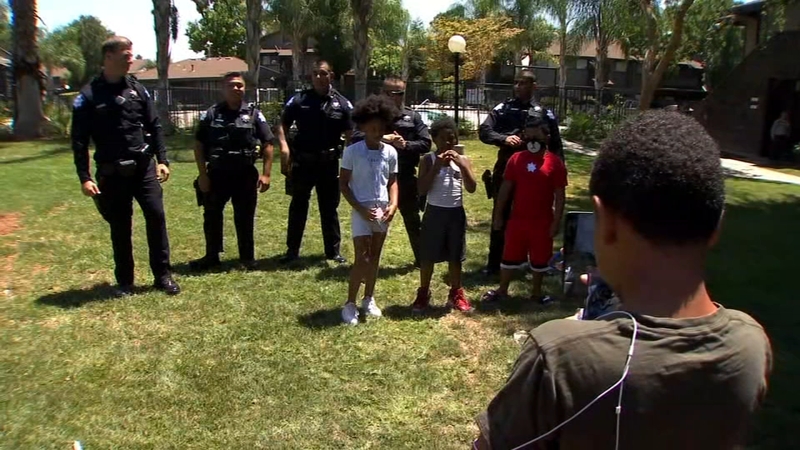 FRESNO, Calif. (KFSN) -- There's a new approach to policing at the Fresno Police Department, and it's happening one football throw, sprint race and conversation at a time.

"Our mission is now more focused on getting the community involved. Attacking the same gang problems, the same crimes that we already have, however using the community with us to solve those problems," said Fresno Police Sgt. Adrian Alvarez.

These officers were part of the southeast Special Response Team, but now they are the Neighborhood Safety Team and working hard to live up to their new name.

Officers are starting by targeting areas where shootings, drug dealing and gangs are a problem. One apartment complex where officers were responding to constantly was the Ranchwood Apartments off Lane and Winery.

Kristine Edigarian lives in the complex and said, "Before, yes, lots of shootings. But now, almost one month and I'm not hearing nothing thanks to the police department."

Residents who brought their kids or grandkids to see the officers and explore their cars felt the experience was good for everyone involved.

Another resident, Josie Aguilar said, "They are people, they are also cops. But they have their own family they are protecting too. I mean, there's something under that uniform and they want people to see that. And I love it. The kids are enjoying it. My grandkid wants to be a cop."

Officer Kao Soy Saechao remembers the impact one officer had on his life. He grew up in an apartment plagued with violence in southwest Fresno. His parents were farm workers who didn't have much.

"I'll always remember this one officer that would stop by and talk to me," said Officer Saechao. "They took us on field trips and I thought it was cool. I remember they took us to Roeding Park to fish. I was like, 'This is awesome, they are coming to our neighborhood to do this.'"

But not everyone is sold on the changes. Sandra Celedon of Fresno Building Healthy Communities says community policing is a start, but a lot of work remains.

It's been a month since officers have started showing up at the apartment complex, and no matter who believes in the new approach, Officer Saechao says he's proof that boots on the ground works.