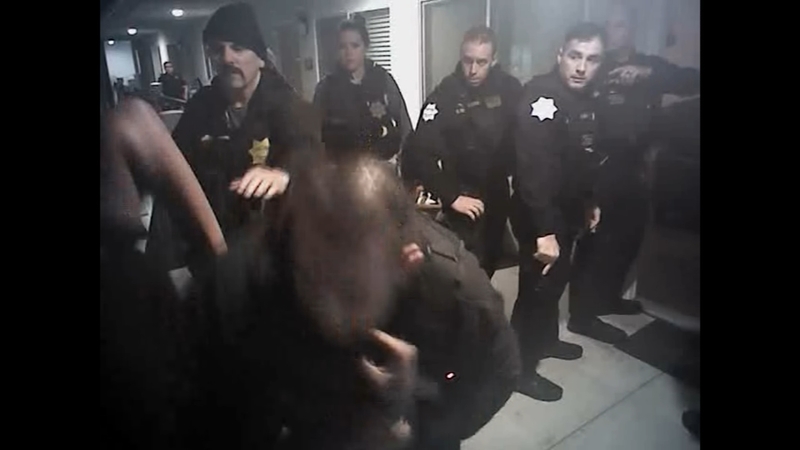 FRESNO, Calif. (KFSN) -- From one officer's perspective, you can see tensions escalating during a gang enforcement operation.

"Attention, apartment 204, this is the Fresno Police Department. If you're inside, make your presence known."

Body cameras caught several angles as an officer grabbed a 17-year-old and punched him over and over again.

"It's a very disappointing situation. You can see London Wallace crying. You can see him bleeding," said attorney Nolan Kane.

BODY CAM FOOTAGE: Several body cameras recorded the confrontation, which is now the subject of an internal affairs investigation.

London Wallace had no gang connections and no criminal history.

"He's a high school kid. He likes playing basketball. He's a nice, calm, timid person," Kane said. "And you can kind of see that in the video. He's not used to police contact."

But police arrested him for resisting arrest after this January incident.

Officer Christopher Martinez wrote in his report that he thought Wallace was going to try to run away. He said he punched Wallace three times in the face, which let the officer get his back off the second story balcony railing.

An attorney for Wallace says the video tells a very different story and prosecutors dropped the charges against the teenager who is now using the video as the foundation of an excessive force lawsuit against the police department.

"But in this case, the kid was patted down. There was nothing there," Torres said. "And I don't see anything that was consistent with an officer basically putting his fist right through his face."

Nolan Kane says it's important for the public to see the body camera footage so they can get the full picture, which often benefits police, but not in this case.

"In this case, it's not going to be London's word against the officer's word. The jury's going to get to see the full footage and they'll be able to decide whether this is something that's acceptable," Kane said.

Police chief Jerry Dyer says he saw the video for the first time Tuesday after Action News asked for comment. An initial use of force investigation did not find excessive force by the officer, and Dyer says the investigation didn't rise to his level, ending on the desk of a deputy chief he would not name.

In a press conference Wednesday, Dyer said the confrontation seen in the video happened on January 23, when detectives from the Multi-Agency Gang Enforcement Consortium were conducting a probation search of an apartment. He said there were several known gang members and firearms present.

An internal affairs investigation is being carried out into an incident in which an officer in the MAGEC unit punched a high schooler repeatedly.

Wallace, who has no criminal history, was in a bedroom at the time.

Dyer said a family member emailed the department on March 25, indicating they wanted to lodge a complaint, but according to police, they couldn't locate that person until May 7. The internal affairs investigation was prompted once they obtained a recorded statement.

In addition to looking for witnesses and conducting officer interviews, they'll be reviewing 40 body-worn cameras that were there.

The chief said he has asked those findings be expedited within the next 30 days.

Based on the outcome, he said appropriate action will be taken.