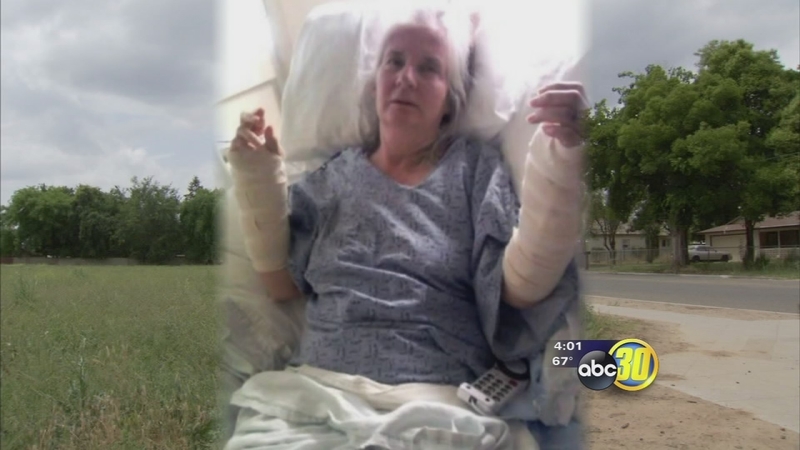 FRESNO, Calif. (KFSN) -- A Fresno woman is recovering Thursday afternoon as police try to track down a dog that attacked the 67-year-old earlier this week.

The victim was knocked to the ground and has several major injuries after she says a pit bull attacked her. The dog's owner is accused of showing up at the scene and quickly taking his dog and leaving the injured woman.

A Fresno police detective has been working to track down the owner to find out why his dog was allowed to be on the loose. In addition, the owner vanished, and according to witnesses was more interested in leaving the scene.

Victoria Young has two broken arms and is still in the hospital after she was attacked while making her way to the Mary Ella Brown Center Monday for lunch. She never made it there.

"She said that she never saw it coming. She felt pain in her leg like something had hit her really hard. When she looked down she saw the face of a pit bull," said Rebecca Garcia, victim's daughter.

Young was walking from her apartment in West Fresno to the community center, which is about a half a mile away when the dog came up from behind her. Fresno police said the dog's owner initially helped the woman get up before leaving.

"The information we have is that a pit bull, and a smaller dog, they were running around the neighborhood loose and one of those dogs is the dog that attacked her. Right after that happened, a Hispanic male went up to her, talked to her briefly, said that he had to go, got into a car that's not described, and left the area," said Joe Gomez, Fresno Police Department.

Officers said the dog bit her leg and it caused her to fall. The victim's family says the dog's owner initially did provide some assistance briefly.

"She is also incredibly grateful, strange as it may sound, that the dog owner got the dog off of her and that she only has the one bite, dog bite, to the leg. But, what upsets me incredibly, is that the dog owner told her he was sorry he couldn't stay and help her, but they would put his dog down and he fled the scene," said

Young is a normally active senior who is currently unable to even feed herself.

Detectives have several questions for the dog's owner and they are interviewing neighbors trying to find him.

A good Samaritan also stopped to help the woman. She stayed with her until emergency crews arrived.