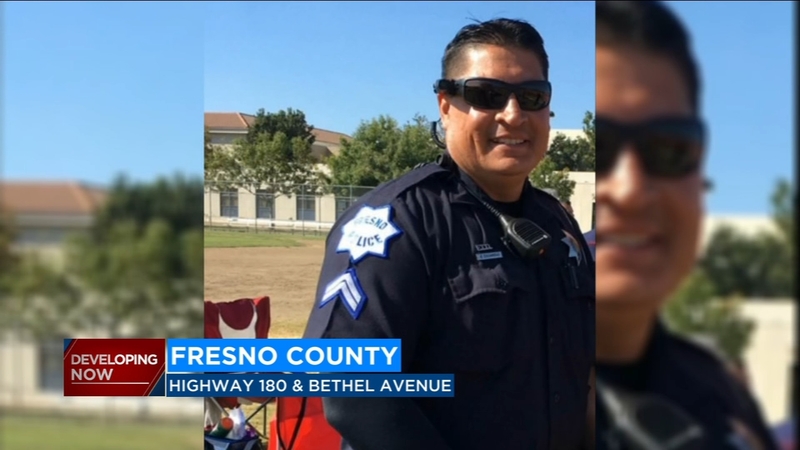 FRESNO, Calif. (KFSN) -- In a solemn show of support, the Fresno police and loved ones embraced as they awaited an update on two of their own.

It was just before 10 a.m. on Sunday at Bethel Avenue and Highway 180, when Officer Eloy Escareno and his wife Maribel were headed to church with their son, niece, and nephew. A driver ran a red light before slamming into their Acura SUV.

#NEW: @FresnoPolice release update on condition of Officer Eloy Escareno and his wife, Maribel.
We'll have more on this tragic story at 11 @ABC30 pic.twitter.com/a3Yq9uKMl0

#BREAKING: An off-duty @FresnoPolice officer & his wife in critical condition after accident near Sanger this morning. Eloy Escareno was heading to church with his family. Please keep Escareno and his family in your prayers 🙏🏾🙏🙏🏻🙏🏽🙏🏿 More on this story at 6 pm on @ABC30 pic.twitter.com/ipjErDdGHf

"Eloy was driving and pinned in the car for about 30 min before they could get him out," said Fresno Police Department Chief Jerry Dyer.

The 47-year-old who's been with the Fresno Police Department for 22 years was airlifted to Community Regional Medical Center.

His wife Maribel, a retired dispatcher with the department was also transported.

"The three children in the vehicle appear to be okay," said Dyer.

#UPDATE: Here is a picture of Officer Eloy Escareno. @FresnoPolice Chief Jerry Dyer is asking everyone to “Please be in prayer for Officer Escareno, his wife and their family.” @ABC30 pic.twitter.com/y598mDuQnJ

Witness Esdras Gomez was driving to church from Sanger. He says after calling 911 he and three others tried to pull Escareno from the car.

"I thought he was dead because he wasn't moving. He wasn't responding. The wife, I could see that she was breathing but he wasn't doing anything," said Gomez.

Gomez says looking back, he's moved by all of the strangers who came together to help.