Chief Balderrama said the department had updated its policy guide with nine of the 73 recommendations put forward.
KFSN
By Shayla Girardin and Hayley Salazar 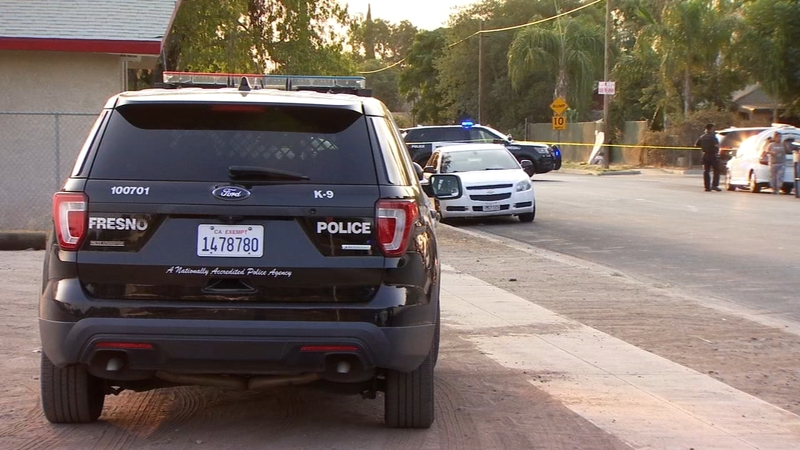 FRESNO, Calif. (KFSN) -- Nearly one year after a commission formed to bring police reform to the Fresno Police Department shared its recommendations, Police Chief Paco Balderrama announced Friday that a handful of those policies are being implemented among his officers.

During a news conference, Chief Balderrama said the department had updated its policy guide with nine of the 73 recommendations put forward.

The modifications were made to three areas of the Fresno Police Department's policies: officers' use of force, internal investigations, and de-escalation methods.

The police chief said that his goal with the new policies is to enhance the department's services and increase public safety.

"One of the things we're trying to do is find balance between safety and trust," the police chief said. "Right now, we're focused on public safety. But we can't lose community trust, and part of that is implementing some of these recommendations."

Chief Balderrama added that he disagreed with some of the proposed reforms, such as pulling police resource officers from Fresno's schools.

"Frankly, I don't feel it benefits the safety of our community or our kids," he said.

RELATED: 1 year after murder of George Floyd, some reform on the way for Fresno police

The police chief said resource officers played a significant role in keeping the community safe after a shooting occurred during a football game between Central and Bullard two weeks ago.

There were also proposed reforms that Chief Balderrama said he could not implement on his own and would require collaboration with city leaders.

"I'm calling them enhancements because that's what we're doing. We're enhancing the Fresno Police Department." Balderrama said, "There's some that will take more work or changes in the law."

So which recommendations are being implemented, and what do they mean for the police department? We've broken it down for you:

One of the recommendations was a revised introduction to the Fresno Police Department's use of force policy. Above you'll see the Commission's suggestion, and below is the new preamble for the department's policy, which includes ensuring "ensure accountability and transparency."

"A primary purpose of this policy is to prevent the use of unnecessary force as defined by the law, ensure accountability and transparency, and to enhance the community's trust and confidence in our officers' ability to protect and serve."

The department said that policies currently in place require that officers only use physical force when necessary, "given the facts and totality of the circumstances known or perceived by the officer at the time." Current policy also states that officers can use a level of force they "reasonably believe is proportional to the seriousness of the suspected offense."

Updates were made to the use of force policy requiring officers to carry less-lethal weapons with them.

The department has updated its "Deadly Force Applications" section of its Use of Force policy to now say officers may use "deadly force only when necessary, in defense of human life, in determining whether deadly force is necessary."

The policy states that officers will need to evaluate the situations they're in to determine when the use of force is necessary and will not be required to use other methods "if reasonably safe and feasible."

Fresno police's use of force policy now clarifies the levels of resistance to help officers determine whether they should be using the use of force.

Fresno police's use of force policy was updated to indicate that the department will review the conduct leading up to an officer's use of deadly force.

The updated use of force policy states that Fresno police officers are now prohibited from reaching into moving vehicles except for when there are "extenuating circumstances."

The department's previous policy states that corrective action could be documented and placed in an officer's personnel file at the discretion of their supervisor. Now, supervisors will need to document instances where an officer was reprimanded. However, the policy states that the "decision to document corrective actions shall be based upon that fact that an issue has previously been addressed or is of a level of seriousness that should be recorded for future reference."

The new policy also states that a reoccurrence of the issue will need to be investigated by supervisors.

When it comes to internal affairs investigations, the Fresno Police Department now says its goal is to complete investigations in less than 60 days since they were assigned.

Incidents that are "complex or difficult in nature" are assigned to the Internal Affairs Bureau, which now aims to complete the investigation within 90 days since they received it.

During Friday's news conference, Chief Balderrama said that de-escalation training was a high priority to implement among the department.

Balderrama said he expected at least another seven of the Commission's recommendations to be implemented over the next month.