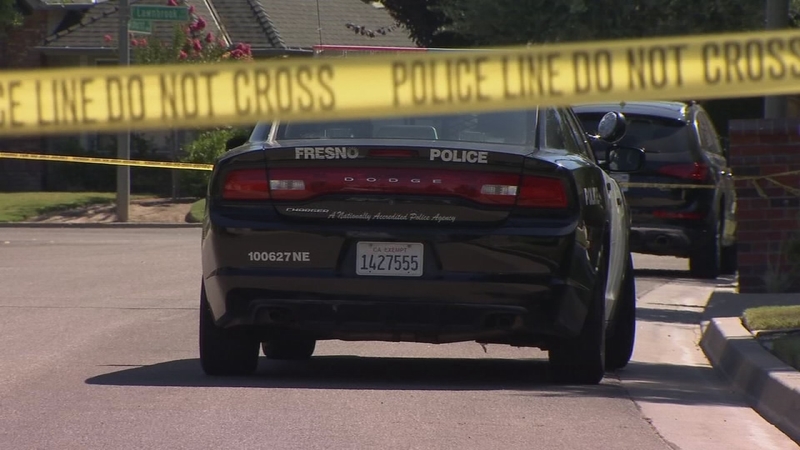 FRESNO, Calif. (KFSN) -- Fresno Police are scouring surveillance video, searching for images of the man they say robbed, kidnapped, and carjacked a 24-year-old nanny and a 1-year-old child in Northeast Fresno. Both got away without any injuries.

"She was fairly hysterical, so it was kind of hard to understand," said Chris Garcia, who owns EZ Fit Meals near where the robbery happened. "We did our best to keep her calm, from there on, I told her to give the cops a call."

The 24-year-old told police she was a nanny, babysitting a 1-year-old. They were walking home Friday morning when she realized a man was following them near Fort Washington and Champlain. Police say he asked for water, then wanted money.

When she said she didn't have any, he forced his way into the house and threatened her at knifepoint.

"Just disbelief that something so terrible could happen three doors down from where you live," said Sven Engvall, who lives on the street.

All three eventually got into the victim's car. The suspect brought them to a Wells Fargo ATM about a mile away and made the victim withdraw money. She was then able to convince him to let her and the child go.

"This is highly unusual, she was just out for a walk," said Lt. Michael Brogdan with Fresno Police. "As far as we can tell the suspect is not known to her."

The suspect is described as a white man, balding, 5' 6" tall and about 170 pounds. He was wearing a faded blue shirt and dark basketball shorts.

The car he stole from the babysitter is a maroon 2000 Mitsubishi Montero with license plate 6NMG705.

Officers say the suspect doesn't match anyone they know of locally. And he mentioned to the victim during the carjacking he may be headed to LA.
Report a correction or typo
Related topics:
fresno northeastkidnappingrobberycarjacking
Copyright © 2021 KFSN-TV. All Rights Reserved.
More Videos
From CNN Newsource affiliates
TOP STORIES