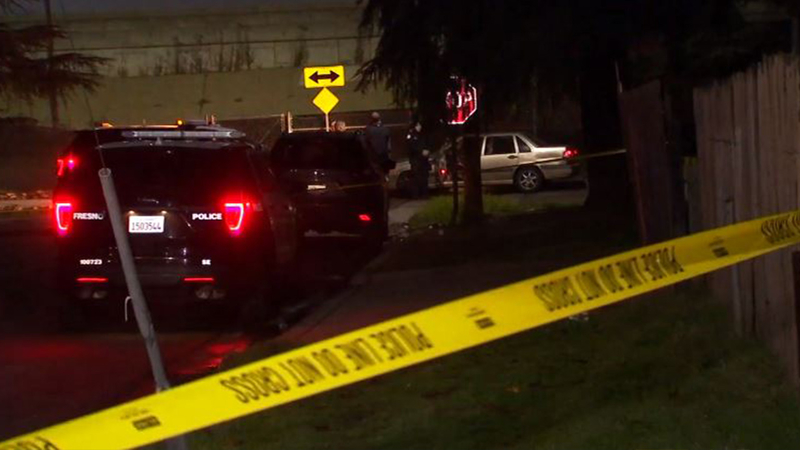 FRESNO, Calif. (KFSN) -- Fresno police are asking people for help in solving their first homicide investigation of the year.

Two teens were shot on Wednesday night in central Fresno, leaving an 18-year-old dead and the other, a 17-year-old, in critical condition.

Investigators say neither of the victims were in a gang.

Officers are still very early into their investigation and don't have many witnesses or leads.

The suspect responsible is still on the run.

"We're looking at this as another senseless act of violence in our city," says Fresno Police Lt. Larry Bowlan.

The 17-year-old is still at Community Regional Medical Center in critical condition.

Officers were called to the intersection of Tyler and Fifth on Wednesday night for an injured person.

When they arrived, they found a car riddled with bullets, and inside was 18-year-old Dezon Cheatham.

Moments later, they found another victim, 17-year-old Christyan Roberts, who investigators say was shot in the face.

"We're still waiting to see if anything comes back from the vehicle - DNA or fingerprints left behind," says Bowlan.

Officers say they're seeing an uptick in violent crime within the last few months.

Last year, they had at least 45 homicides.

The increase in crime is why officers say they have a new plan of action aimed at stopping those numbers from continuing to go up.

"One thing we are starting today is a city-wide gang operation. We are going to be increasing some of our tactical teams out there on a nightly basis and we're going to be hitting neighborhoods out there conducting probation checks, pedestrian searches to try to squash this," says Bowlan.

Investigators don't believe this particular shooting has gang ties, and say the two victims appear to be innocent teenagers with bright futures.