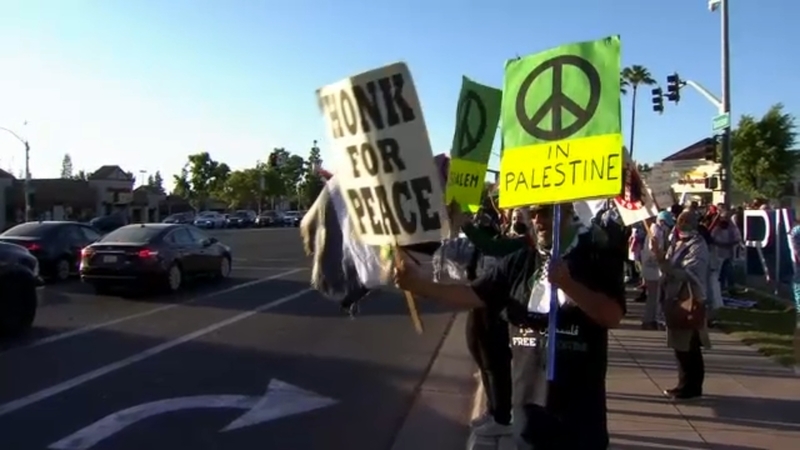 FRESNO, Calif. (KFSN) -- Hundreds have been gathering in Fresno calling for an end to violence in Palestine.

More rallies are expected this week.

Hundreds filled the street corners near Blackstone and Nees Tuesday night to stand in solidarity with Palestinians.

There were a few tense moments that Fresno Police kept a close eye on Tuesday, but nothing troubling enough to step in.

"For the most part they've been relatively peaceful, but we have had a few incidents that have emerged during those rallies," said Fresno Police Dept. Lt. Rob Beckwith.

Turner was arrested and has been charged with three counts of illegally using pepper spray with a hate crime enhancement.

He's scheduled to be arraigned in July.

On Tuesday evening, police say a man in his 50s reported to police he got into a verbal argument with a woman holding a cardboard sign.

During the confrontation, the man claims he was sprayed with pepper spray by someone in the crowd.

Police are still investigating and, so far, don't have a description of the potential suspect.

Authorities said their biggest challenge is to ensure that people have a safe environment to demonstrate.

Officers will continue to be at future rallies to make sure no one is breaking the law or gets hurt.

"It's our job. It's our job to keep the community safe and we're going to continue to do that," said Lt. Beckwith.

The Fresno Police Department said, bottom line, their job is to make sure people feel like they can safely exercise their First Amendment right.