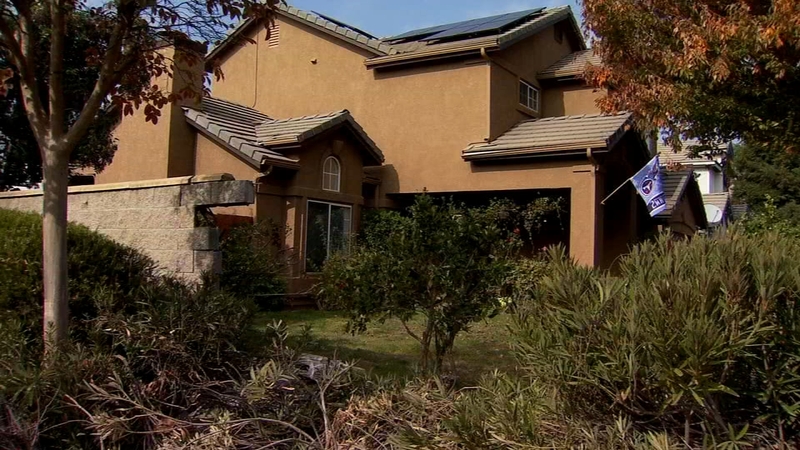 "And I come down and I'm like 'What's going on?' and I see half of a BMW into my wall right here," Eubanks said.

Pictures of the aftermath show the damaged BMW practically sitting in Eubank's front yard along Nees Avenue and Fifth Street.

Fresno Police said Raymond Abina slammed into the wall at about 1:30 a.m.

The 53-year-old, who has three previous DUI's on his record, was cited for misdemeanor DUI that night.

Less than a month later, as Eubanks was out of town on vacation, she got a call from Fresno Police.

The officer told her someone hit her truck which was parked in her driveway.

"'Somebody came through your wall and hit the truck.' I'm like, 'Again?'" Eubanks asked the officer. "I literally said 'Again?' on the line. They were like, 'Oh this has happened before?'"

Her security cameras caught the driver around 3:30 a.m. veering straight into the bushes and the wall, continuing through the front yard, into the tree and into Eubank's parked truck.

"That's a long way and she had to be going really fast," Eubanks said.

Video shows the driver appeared to try to take off, but Fresno Police happened to be nearby and stopped her.

Officers said the driver was emotionally distraught and was taken into custody for a mental health evaluation.

Instead of coming home from her vacation relaxed, Eubanks returned to cinderblocks in her front yard.

She said the wall was installed as a beautification project before she moved into the home 12 years ago, so, left with a major hole, she contacted the City of Fresno to see if they would repair it.

That's when she found out her property line extends beyond the wall, so it's her responsibility. City officials confirmed that with Action News.

"It's an unfortunate thing. I'm glad no one was hurt, I really am, but it sucks because I have to deal with it now."

Eubanks hopes her experience is a lesson to all homeowners.

"Always know what your property line is and understand what's your responsibility and what's not," Eubanks said.

Eubanks said, thankfully, both drivers had insurance. She also has full converge on her own truck, which ended up being totaled.

She said she's going to have the retaining wall replaced and moved closer to the street so that, if it happens again, it hopefully won't damage her home or vehicle.