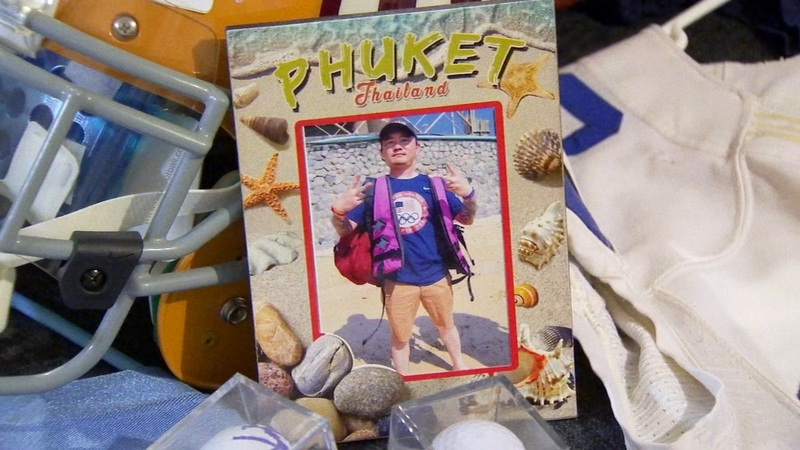 FRESNO, Calif. (KFSN) -- Family members are holding on to the mementos they have left of Phia Vang.

Phia was killed Sunday night, along with three other men, after armed suspects opened fire on them at a football watch party.

Video taken about two months ago shows Phia and Hmong artist Xy Lee, another victim of the shooting, perform a song together.

"They always come to the house to play around and practice their music,"

With the suspects still on the loose Phia's father, Seng Vang, didn't want to show his face on camera and used a translator to share his pain.

"Right now, my heart is in many pieces," he said.

In the moments after the shooting, Seng suffered in anguish for hours, unsure yet if his son was one of the victims. It wasn't until the following day he was told of his greatest fear.

"We finally got word that my son's body sent to the coroner's office and we still to this day have not seen my son," he said.

Phia, also known as Cha by his family, was a sports enthusiast. He often played soccer and collected jerseys and other memorabilia from his favorite teams.

Seng says his son was a hard worker who provided for his parents and five siblings.

Xy Lee, Kalaxang Thao, and Kou Xiong also died at the party with Vang. Their families are also reeling from the devastating aftershocks of grief.

Xiong's family, who lived at the home where the shooting occurred, gathered outside Tuesday, mustering up the strength to remember the husband and father.

"I love you, I love you so much. He never had any problems with anybody. Today I plug my heart to his heart. I don't know what to do with my life now that I don't have him."

Action News reached out to Kalaxang's family, but they say the loss is too painful to speak about.

Phia's family says they have set up funeral services for their son in late December.