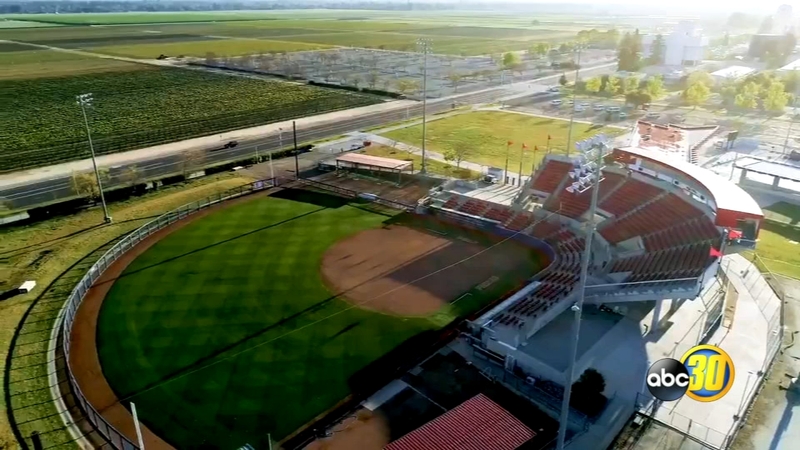 FRESNO, Calif. (KFSN) -- "We need to do a better job of teaching the students how to differentiate themselves," says Jeremy Darlow. "How to set themselves on a path when they're freshman or sophomores, not the last three weeks of their college careers."

When you hear the word "brand" or "brand development," you might think of big companies like Nike and Adidas.

"We're all brands and we're all competing," he said.

Darlow is trying to change that thought.

"What people need to realize is that a brand is no different than a reputation," he said.

The former director of marketing for Adidas football has literally written the book on why athletes are brands too.

"What I realized while I was at Adidas is even the most acclaimed of athletes, they don't typically have plans for life after the game," he said.

This year, Darlow partnered with 30 schools, including Fresno State to get athletes to start focusing on their plan post-college.

"I tell every student-athlete, you should never lose a job interview to somebody like me," he said. "You have awareness, you have buzz, you have acclaim that the average student doesn't have, and I want them to understand that before they graduate."

Blake Lawrence is the co-founder of Opendorse, a company started in 2012 after the former linebacker at Nebraska saw injury bring an abrupt end to his football career.

With nearly 2 million followers on the social media platform TikTok, Hanna and Haley Cavinder could see the mots benefit of these social media ads on day one.

"So you're saying the Cavinder twins have more of a presence than say a quarterback from a power five conference?"

"Absolutely," Lawrence said. "The Cavinder twins would be one of the top 25 most marketable, in terms of online presence, female basketball players across college basketball and the WNBA. The type of presence they command on Youtube, on TikTok is worth six figures in terms of annual earning potential."

Both partnerships are set to get Bulldog athletes for the long-term and be better equipped to capitalize on the buzz being a student athlete provides.

"How to go out and get a job, how to stand out," Darlow said. "That should be a pre-requisite to every university in my mind and the fact that we're doing it at Fresno State for student-athletes, I think is a testament to what they're doing there as a university and as a school."
Report a correction or typo
Related topics:
sportsfresnobulldog breakdown
Copyright © 2021 KFSN-TV. All Rights Reserved.
TOP STORIES
Fresno bars set to require proof of vaccination or negative COVID test
Family pleads for help finding hit-and-run driver in central Fresno
New details emerge in arrest of 2 Livingston police officers
CUSD parents given option to fill out forms for children and masks
Disney joins list of companies requiring vaccine for nonunion workers
Fresno Co. officials seeing more COVID cases in ages 10-30
Tulare County officials call Delta variant 'very concerning'
Show More
CDC document warns delta variant spreads as easily as chickenpox
Traffic hazard: Big rig overturned on Highway 99 in Pixley
Fresno's Hmong community reacts to Sunisa Lee winning gold medal
Mom who gave birth to 9 thriving babies at same time speaks out
Fresno likely to enforce vaccine, testing mandate for employees
More TOP STORIES News