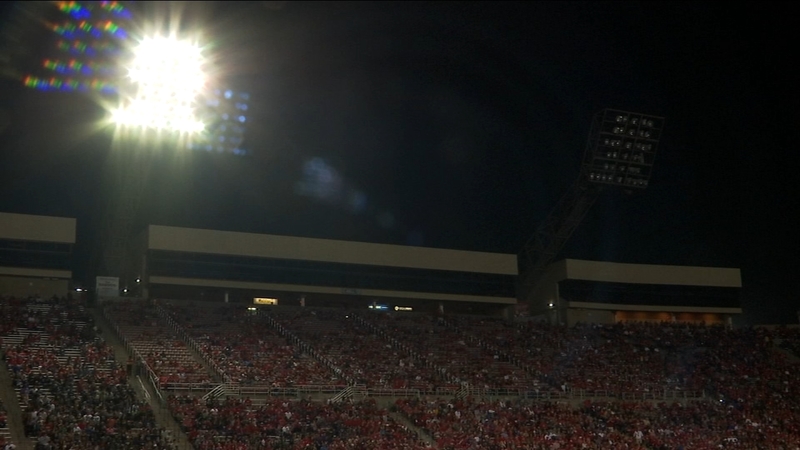 FRESNO, Calif. (KFSN) -- Just as the Bulldogs were getting set to crack the national rankings a blown circuit-breaker turned out the lights on the Southeast section of the stadium in the first quarter.

As maintenance crews scrambled to get the lights back up and running, ESPN switched it's broadcast back to Bristol for the next half hour.

The game eventually resumed but an aging Bulldog Stadium is a concern for the cash-strapped University.

It seems like the only thing that's been able to stop Jeff Tedford's Bulldogs lately is a blown circuit-breaker.

One of the light towers at Bulldog Stadium went out with about five and a half minutes to go in the first quarter Saturday night.

Forcing both teams to the locker room for the next half hour.

"Really my focus was just how do we prepare when we come back on the field again. And how do we resume play from that point," said Coach Tedford.

The red wave might've been caught off guard by the power outage but the ESPN crew and Bulldog coaching staff were both aware of the possibility of a blackout just before kickoff.

"There was a little bit of a warning before the game that it was possible because the lights went out in the suites. When it happened it wasn't a total shock," says Coach Tedford.

Fans took out their cellphones to help illuminate the stadium before power was restored.

But this is a concern for the University going forward.

Just last year, a section of Bulldog Stadium had to be closed after engineers discovered damaged caused by a broken irrigation line just days before the team's conference opener.

"I'm not equipped to say how we fix it but the stadium is a little bit older so there are probably certain things that need to be addressed with it but it's still a great stadium to play in," Coach Tedford said.

Once the lights came back on Fresno State would go onto a blowout victory over Hawaii.