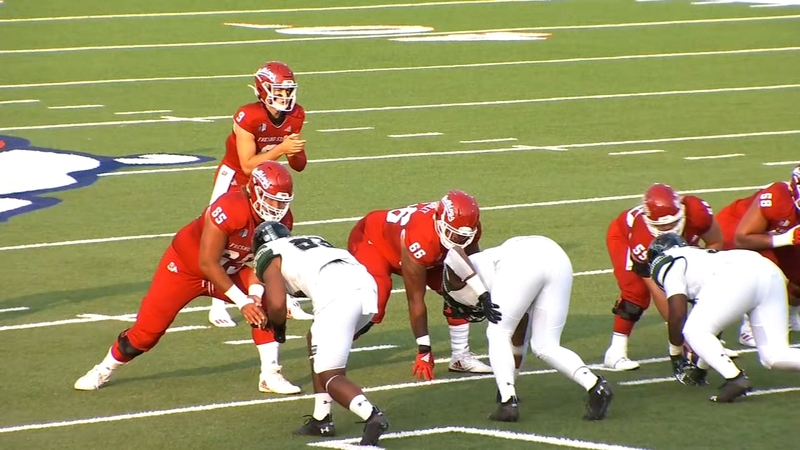 FRESNO, Calif. (KFSN) -- Fresno State kicked off its 2020 season with a 34-19 loss to Hawaii. It was Fresno State's first game in 329 days, the longest stretch for FS without football since World War II.

It was also the first game for new head coach Kalen DeBoer, the Dogs' offensive coordinator from 2017-18.

The Dogs started out by forcing and recovering a fumble on the opening kickoff. Senior running back Ronnie Rivers then ran in a 7-yard touchdown for the game's opening strike.

Bulldogs were told to BYOJ (Bring their own juice). Jr. lineman Quireo Woodley has more than enough for @FresnoStateFB. FS forces a fumble and recovers the opening kickoff. @ABC30 pic.twitter.com/evNrdyNgbs

But that ended up being the only turnover for the Rainbow Warriors, while Fresno State finished with four. In his first start as the Bulldogs quarterback, Jake Haener threw an interception on his second throw of the game and fumbled on the Dogs' 3rd drive.

Two more deflected passes led to four total turnovers for the junior transfer from Washington. He finished 17-31 for 289 yards and a touchdown (to Juan Rodriquez in the 2nd quarter).

“Welcome to the field your Fresno State Bulldogs.” @ABC30 pic.twitter.com/DfHT8N5wYr

Kwami Jones, back from injury at defensive end, came up with 3 sacks in the first quarter. It was more than the redshirt senior had all of his last full season in 2018 (2.5). The Rainbow Warriors had their way after that, converting 10-15 third downs and running for 258 yards.

The Bulldogs ended its 2019 season with a four-game losing streak. FS was 1-5 in one-score games, including a 41-38 win at Hawaii last year.

One score game in the 4th quarter...Bulldog Stadium would’ve been ROCKING. Instead it’s an audible at the line and another first down for Hawaii. “3rd down thunder” missed in a big way. @ABC30 pic.twitter.com/3nkmj803a8

Next up for the Dogs is a Thursday night matchup against Colorado State (0-0). It will be the season opener for the Rams, who saw their game against New Mexico canceled due to the prevalence of COVID-19 in the Lobos home county.