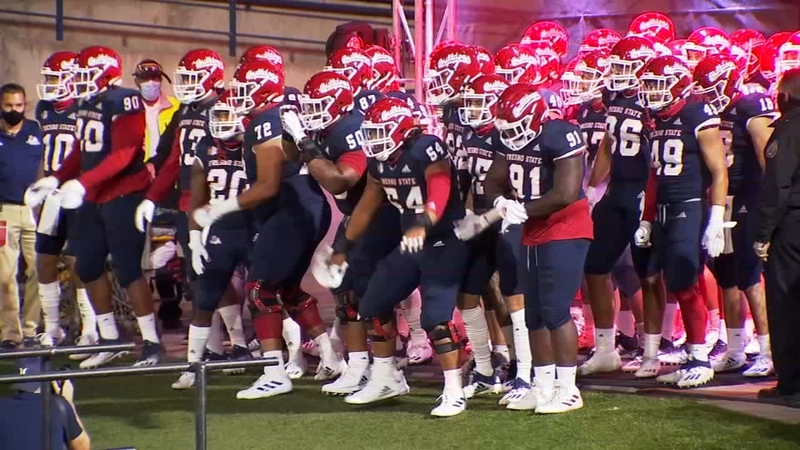 FRESNO, Calif. (KFSN) -- Fresh off his first Gatorade bath with the Dogs, Kalen DeBoer turns his focus to this weekend's opponent, UNLV (0-2).

The Rebels average less than 15 points a game but the first-year coach says to "throw the records out."

"They've got some people that can do somethings," DeBoer said in his Monday press conference.

Number one on that list, a running back from the Central Valley. "Certainly I'm sure he's going to be motivated to play us," DeBoer said.

Senior Charles Williams, a Bullard HS product, is still looking for his first touchdown of the season but last year, found the end zone 11 times.

"He's not just elusive but packs a punch, has explosiveness both physically and also down the field as far as popping the big one," DeBoer said.

Still, if it turns into a shootout Saturday, the Dogs showed they have the dynamic playmakers to get the job done.

Six different players were on the other end of plays 23 yards or longer and quarterback Jake Haener found three different targets in the end zone, but the most important number, there were zero turnovers against the Rams.

It will also be FS' first road trip of 2020, to of all places, the sparkling new Allegiant Stadium that houses the Rebels, as well as the Las Vegas Raiders.

"We'll go take a look at it on Friday and make sure that we get that out of our system," DeBoer said.

It'll also be the first time this year the dogs play in front of fans. Three percent of stadium capacity will be allowed in, or about 2,000 fans.

"The cool thing about it is that hopefully, some parents will be able to see their sons play in person," DeBoer said. "A lot of these guys have played in big stadiums and not that this is your ordinary stadium, because it's not. In the end, it's still a football field that most importantly they've got to play a great game on."

The next two games are on the road and both are early starts. Saturday's kick is set for 12:30 PM on CBS Sports network. The following week against Utah State will kick off at 11:30 AM on FS2 on 11/14.
Report a correction or typo
Related topics:
sportsfresnobulldog breakdownfresno state bulldogs
Copyright © 2021 KFSN-TV. All Rights Reserved.
FRESNO STATE BULLDOGS