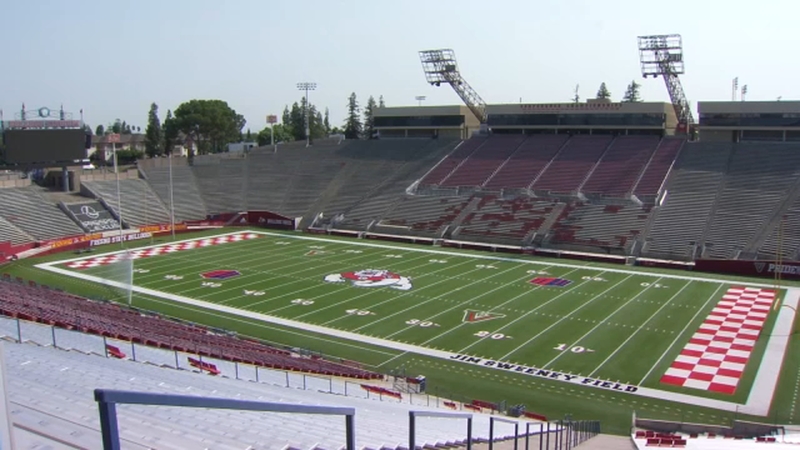 "At the end of the day, we're throwing a party for 40,000 of our nearest and dearest friends," says Fresno State Director of Facilities and Operations Matt Studwell.

Studwell is the man behind gameday at Bulldog Stadium.

Nothing in or around the stadium gets done without his approval or direction.

Studwell overseas about 1,500 staff members on home games. His job is to make sure everything runs smoothly not just for the Red Wave, but also for the two teams competing on the field.

"Right now, we're still making our final touches, so we're updating some advertising signs around the stadium, updating some lights, making sure everything is clean and ready to go," he said. "All those small fixes are going on right now."

The excitement surrounding Saturday's opener against UConn has the roster ready to showcase the hard work they've put in this off-season.

But Studwell and his staff are also looking forward to showcasing their hard work at the first home game with fans in almost two years.

"There's so much around town, the university, the Valley that revolves around Bulldog football in this stadium," he said. "So whether you are in the stadium or in the tailgate lots, the gameday atmosphere is special to us and it's an atmosphere you don't get at a lot of other schools in the state, but it's unique here to Fresno State."

While coaches and star players have always been the face of college programs across the country, people like Studwell and his staff remain an integral member of the team despite the fact most fans have never heard of them.

"Equate it to your life," says Senior Associate Athletics Director for External Relations Frank Pucher. "If you're hosting a party or event at home for 10, 12 people, the amount of work that goes into it. Now multiply that by 40,000 people. It's incredible when you factor in the infrastructure needs, the facility needs, technology, just all the different components of putting on an event and making game day run smoothly so it's not only enjoyable, but safe. Matt and his team are incredibly valuable in that effort."