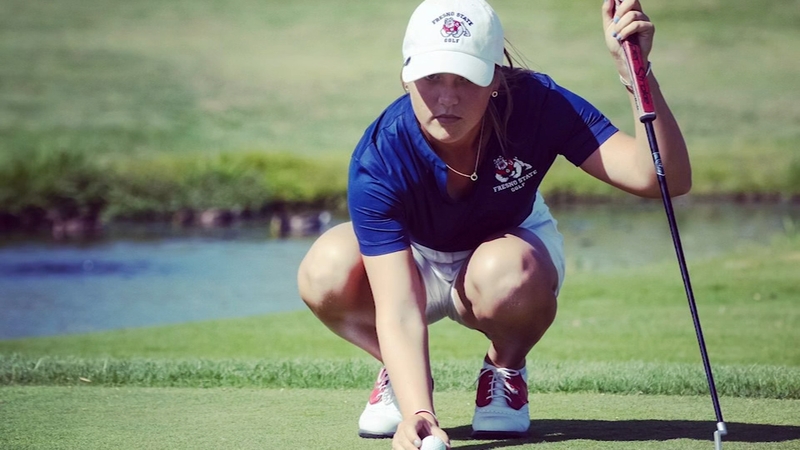 FRESNO, Calif. (KFSN) -- Fresno State's women's golf team had their season cut short this year due to the pandemic.

The Bulldog is back home in England and has been competing in golf tournaments this summer.

"I played my first event at my home club in Brentwood," she said. "That was just in a ladies comp, and I shot 6 under, which was the new course record. So that was kind of good coming out of the gate."

Harriet was the previous record holder at the course. Since returning to England, she's spent her downtime trying to improve her game. Her family transformed their garage into a gym and added a putting mat.

"Fresno State was a stepping stone for me because it was always a dream of mine to make it to America," she said. "I felt like it was easier to make it over there than over here. Not being a part of the England national squad, it is quite hard."

When Harriet joined the Bulldogs golf team, she was the youngest player.

"It just helped me grow up a bit, and they were all such good golfers already," she said. "Being in that environment where everyone has the same goal really helped us thrive into the team we've become."

The Bulldog averaged just under 73 last season and finished third at The Gold Rush tournament at Seal Beach. She was also named the Mountain West Golfer of the Week in February.

Harriet's biggest challenges didn't come on the golf course, but rather at the dinner table.

"It definitely took time to adjust to the food, having all these big proportions was overwhelming, but I thought I adjusted pretty good," she said.

Lynch has dreams of playing on the LPGA and want's to qualify for the Augusta women's national like her teammate, Brigitte Thibault. Her favorite golfer is Tiger Woods.

"I've always loved Tiger Woods, the way he bounces back from things," she said. "My boyfriend got into The Open last year. We saw him, his presence was unreal. I think I started crying at one point."