Fresno State falls out of AP ranking after loss to Hawaii 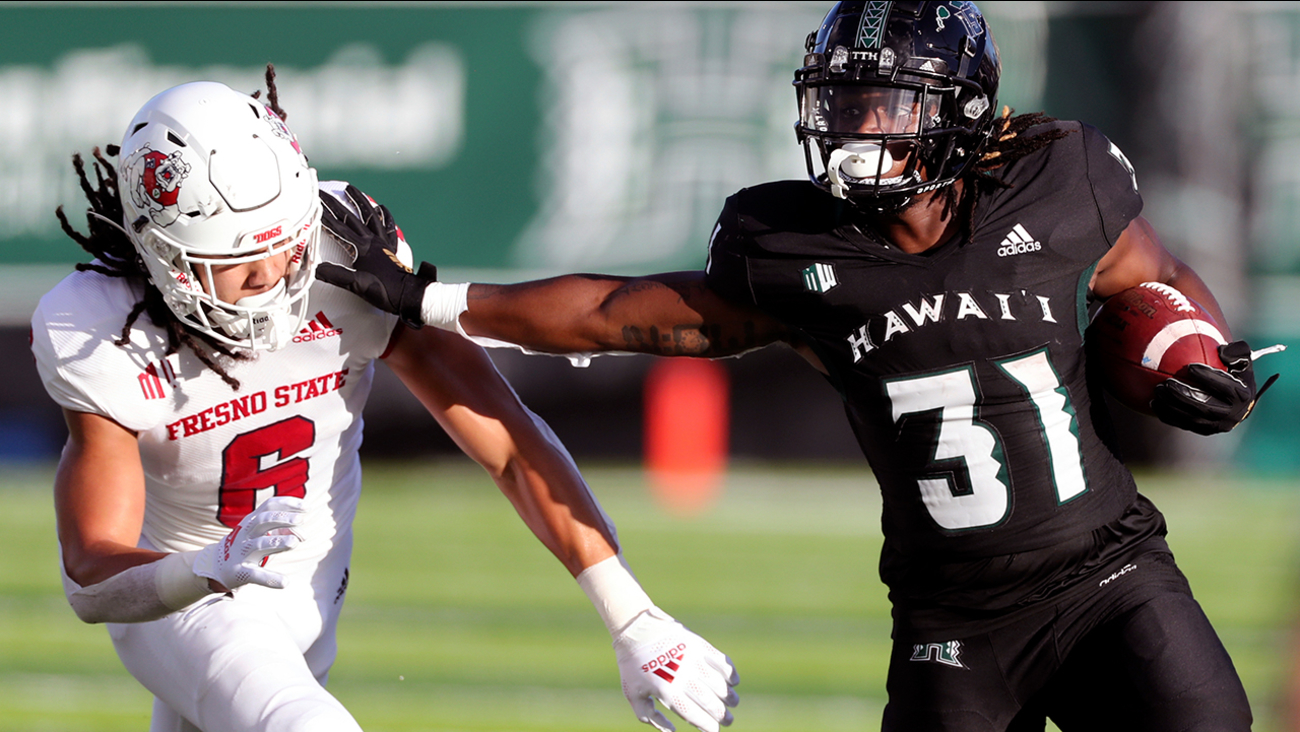 FRESNO, Calif. (KFSN) -- The Fresno State football team has dropped out of the Associated Press Top 25 rankings after it fell 27-24 to Hawai'i on Saturday night.

Just a week ago, the Bulldogs rose to #18 on the poll after defeating the UCLA Bruins and the UNLV Rebels.

But on Saturday, six turnovers were the downfall for Fresno State.

The heroics from quarterback Jake Haener from the pass two weeks turned to heartbreak as the senior accounted for five turnovers; four interceptions and a fumble. FS falls to 4-2 on the season and 1-1 in conference play.

Hawai'i was dealt an injury blow before the opening kick with news that quarterback Chevan Cordeiro would be unable to play. That gave the start to Brayden Schager. The freshman connected with Nick Mardner for a 27 yard strike that was initially ruled a touchdown before a review moved the ball to the 1 yard line. Calvin Turner Jr. ran in the score from there to make it 7-0 Hawai'i.

After a three and out, the offense looked to be getting back on the field following an interception from Evan Williams but a holding penalty from DaRon Bland negated the pick and Hawai'i kept possession. The drive would result in a 34 yard field goal making it 10-0.

FS answered with a 65 yard touchdown from Haener to Zane Pope for the senior wide receiver's first touchdown of the season.

End 1Q: #18 Fresno State 7-10 Hawaii
Another FS turnover turns into points. But a 65 yard touchdown from Zane Pope puts the Bulldogs back in the game. Haener & co. driving to start the 2nd. @ABC30 pic.twitter.com/9JyFrWio9c

The Bulldogs were driving to start the 2nd quarter before Haener was picked off by Cortez Davis. FS got the ball back and answered with another Haener to Pope connection to give the Dogs its first lead of the game 14-10.

FS got its first takeaway of the night when David Perales got a strip sack on Schager and Arrun Mosby recovered the fumble. The Dogs were driving before a second interception from Haener, this time at Hawai'i's 7 yard line.

The offense responded by scoring on its opening possession of the second half. Haener connected with Jalen Cropper, the reigning MW Offensive Player of the Week, for a 35 yard strike to make it 21-10 FS.

Haener took a hit to his left leg at the end of a 20 yard completion to Keric Wheatfall and had to be helped off the field. True freshman Jaylen Henderson entered the game and after failing to get a first down, Cesar Silva hit a 48 yard field goal (his longest of the season) to make it 24-10 FS.

Haener would return to the game after missing just three plays but then threw his third interception of the night, his first time throwing that many picks since his debut last year against the Rainbow Warriors.

It would turn into points when Schager connected with Caleb Phillips for a 26 yard touchdown to make it a one score game 24-17.

After a booth review overturned a catch from Ronnie Rivers that would've been a first down, FS failed to convert on fourth and 7 from Hawai'i's 40. The Rainbow Warriors would capitalize with a 18 yard touchdown from Schager to Turner to tie the game at 24 with 7:05 to play.

With 0:14 to play at the Hawai'i 10 yard line Haener's pass was tipped off the hands of Ty Jones and intercepted to effectively seal the game.

Next up for FS is its first and only bye week of the season. The team will return to play on 10/16 with a roundtrip to face Wyoming. Kick time is still to be determined.