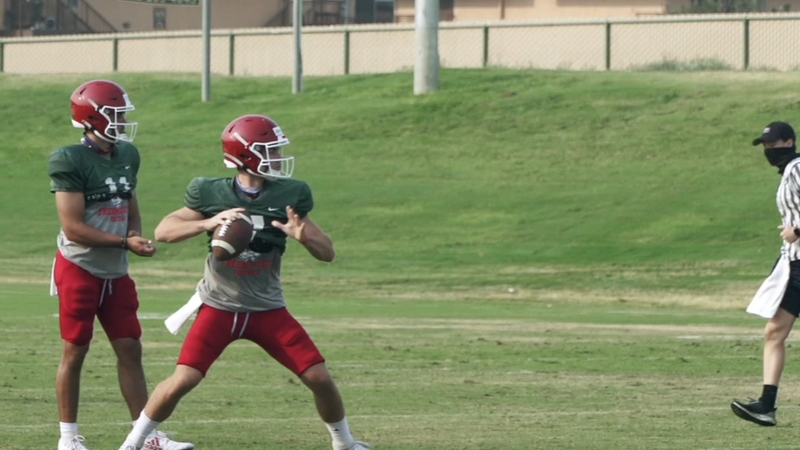 FRESNO, Calif. (KFSN) -- Four days before the season opener, Fresno State's new starting quarterback Jake Haener met with the media for the first time. The junior transfer from Washington shared the story of how his parents actually met at Bulldog Stadium.

"My dad saw my mom for the first time and went 'Who is that?' and they go 'oh that's Julie Haener' or Julie Hogan at the time," Haener said. Julie, a former TV anchor in Fresno now in San Francisco was sent flowers "and they kind of just gravitated toward each other and then I came along," Jake said Tuesday.

The junior signal caller, who's listed at 6'1, says he looks up to Drew Brees and has a relationship with former FS signal caller Kevin Sweeney. "Kevin has just been a really good role model for me. He's helped me, he's going to continue to help me and that family has just made me feel at home during this whole process and during this whole thing," Haener said.

Jake has Kevin's permission to wear his retired #9 and will be the first FS quarterback since Sweeney to wear the number. In a release back in August Sweeney said, "I love the fact that I know his dad, his family and he's got a Fresno connection. I think he wants to wear it and make his family proud but also the Sweeney family proud."

He also has a relationship with Trent Dilfer going back to an Elite 11 camp in 2016. "There I was with Tua (Tagovailoa), Dylan McCaffrey, Jack Sears and a lot of guys who had big Power 5 offers and I threw the ball as good as them," Haener said. "Trent's the reason a lot of this is happening for me."

Trent Dilfer found @FresnoStateFB's QB1 Jake Haener at an Elite 11 camp (which featured Tua Tagovailoa). Coming up at 6 PM @ABC30 hear what the former Bulldog has to say about the current signal caller + the 2 former QB's his game compares to the most! (📹 via @BleacherReport) pic.twitter.com/MeFvqwhP3i

In this week's QB&A, Dilfer gave a scouting report on what the Red Wave will see come Saturday's kickoff against Hawaii. "One a dynamic leader, checks every intangible box and he's a better athlete than people think," Dilfer told Action News. "People are probably going to classify him as a pocket quarterback, he's a guy who can extend plays and beat you on the run. Deadly accurate."

"I was texting him last night telling him congratulations and just telling him that now it's on him to go be one of those great Dog quarterbacks."

As for a comparison, Dilfer said, "He's probably more Derek Carr, Kevin Sweeney than he is me. I think Kevin is one of the greatest players to ever play in Fresno. Jake very similar mentality, very similar competitive temperament, very similar thrower. Those of you old enough to remember Kevin's playing days look for Kevin Sweeney 2.0."

Tuesday Haener was named one of four captains for this year's Bulldog team as voted on by the team. He's joined with senior center Matt Smith, sophomore defensive back Evan Williams and senior defensive tackle Kevin Atkins.