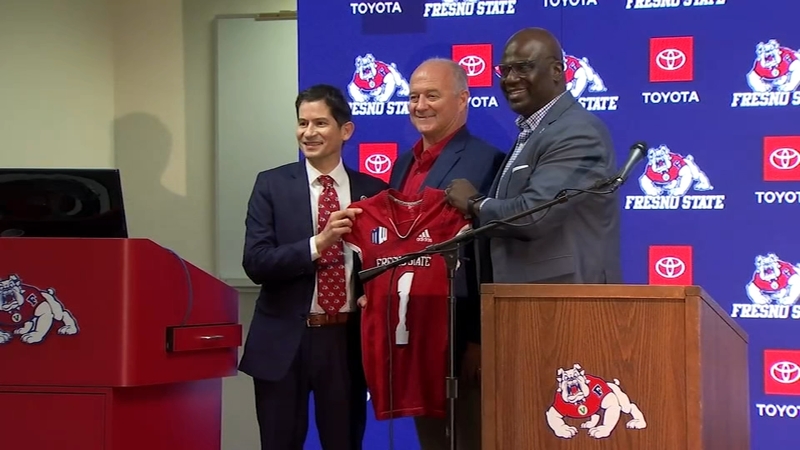 Administrators believe it also helps the athletics program and the university as a whole.

Bulldog Stadium opened in 1980 and it's had some renovations during those 41 years, but getting Coach Tedford in the fold may be an important step in getting the funding for a new stadium.

The number one choice to lead Fresno State's football team always seemed to be Jeff Tedford, so much so that he couldn't walk into a hardware store without hearing encouragement and advice, as he related in this anecdote:

"A little older lady with her bubble wrap is right behind me and is like 'Coach, are you coming back?'" he said. "And I'm like, 'I don't know. I hope so.' And she said 'Well, we can't go anymore. My husband's not doing well. But you got to do something with that stadium.' She's all into it. I'm like, 'I know. I get it. Hopefully when we do, you can come back.'"

Tedford says the passion has been loud and clear from the Red Wave this past week. He says an older lady behind him in line at ACE Hardwood asked him if he was going to come back 🤣

A new stadium and updated athletics facilities came up repeatedly in Tedford's introductory press conference, and university president Dr. Saúl Jiménez-Sandoval says it's top of mind for him as well.

"We're in deep conversations about that. I'm deeply invested in that because I know that the stadium is not just the stadium. The stadium is the place that the community comes to and there's a sense of belonging. The space gives you a sense of belonging."
He says hiring Tedford helps push those conversations forward because of his strong track record and familiarity with the football program, his obvious passion for the Valley, and his vision for the team's future.

Jiménez-Sandoval says Tedford keeps the momentum going for the football program, and by doing so, lifts the entire athletics department.

Tedford won't coach the New Mexico Bowl on Dec. 18, but he's hitting the ground running on recruiting players and coaches to fill this stadium next year.

Tedford won't coach the New Mexico Bowl on Dec. 18, but he's hitting the ground running on recruiting players and coaches to fill this stadium next year.

Haener had initially entered the portal one day after Kalen DeBoer left for the University of Washington.

It is not known if Haener will remain with the Bulldogs.

Can confirm Haener has withdrawn from the portal.