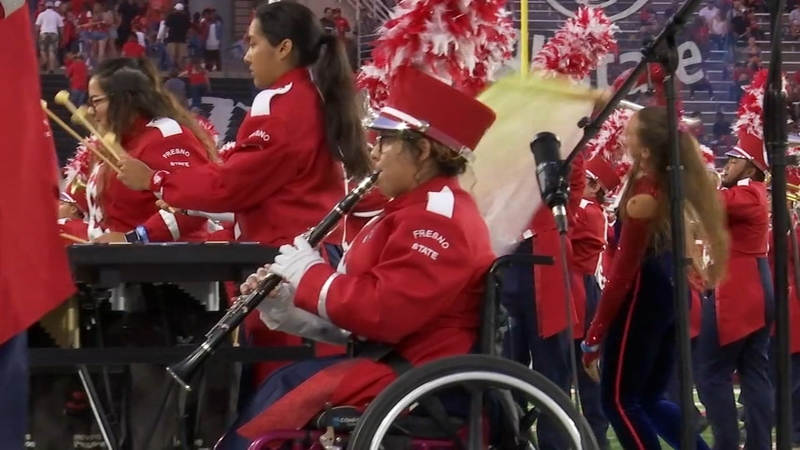 FRESNO, Calif. (KFSN) -- Fresno State's football games would be nothing without their marching band.

The sights and sounds of pregame festivities at Bulldog Stadium is a spectacle.

"It's been an amazing experience coming into this program. The Fresno State is overall very inclusive and welcoming, I've made friendships here and I love it," said Fresno State marching band member Viviana Reyes. "When I was in sixth grade, I chose the clarinet, mostly because my friend did so I was like cool we'll have something to do together. I chose Clarinet, I remember the first week I had such a hard time, I can't get a sound of it. "

Reyes transferred to Fresno State this year from Bakersfield College. She chose the university because of its deaf studies program and wanted to be a part of the Bulldog marching band. Although Viviana uses a wheelchair that didn't stop her from fulfilling her dream of playing on game day.

"I always have to ask is there accessibility? How am I going to get around? I try not to focus on I can't do this more what can I do in this situation," said Viviana.

The marching band traveled with the football team to USC for the opening game of the season. The accessibility at the Coliseum presented a challenge for Viviana.

Drum Major Blain Haskin took notice and made sure she was able to participate.

"When we got to the USC game we were in our new uniforms and the stairs were massive, there were a lot of them," explained Haskin. "So I went up to her and I was like hey I want you as comfortable as possible but I want you with us, you're a part of this band, you need to be up there in the stands. Can we pick up the wheelchair? Can we pick you up whatever you're comfortable with I didn't want to cross any boundaries. I swooped her up, carried her up the stairs and she was able to be with us the whole game. Halftime came and I carried her back down and she was on the field with us."

That's where their friendship started, Viviana says being able to play at the football games is one of her favorite parts about being in the marching band.

"I think that's a beautiful thing about being in this program is the love, care, and support you feel as soon as you join. You're immediately a large family of 240, 260 people and you can' t get that anywhere else," said. Haskin.

"There was this mentor I had, and she would always say there's no can't in your vocabulary, you can do it," explained Viviana. "That really stuck with me till now, the fact that I can do whatever I set my mind to."
Report a correction or typo
Related topics:
sportsfresnofresno statebandsportscollege footballfresno state bulldogs
Copyright © 2022 KFSN-TV. All Rights Reserved.
SPORTS
Novak Djokovic leaves Australia after court rejects visa challenge
Michelle Kwan announces birth of her first child
Fresno State men's basketball game vs. Wyoming postponed
Valley native Jalen Green gives his own shoe to excited fan in stands
TOP STORIES
Le Grand woman charged with 3 counts of murder for deaths of children
Man shot and killed in central Fresno, police say
New details emerge in killing of mother and grandfather in SE Fresno
DA to pursue death penalty against 3 accused in Fresno mass shooting
Health officials credit vaccine for low COVID rates at nursing homes
Ag leaders working to protect Valley farmworkers during Omicron surge
1 killed, 3 injured in crash on Highway 41 in Fresno County
Show More
UC Merced to bring back students in stages for in-person learning
CA proposal would let older kids get vaccines without parents' consent
Arnold Schwarzenegger involved in multi-car crash in Brentwood
Fresno State business students looking for Valley internships
Esmeralda Soria announces run for CA State Assembly
More TOP STORIES News