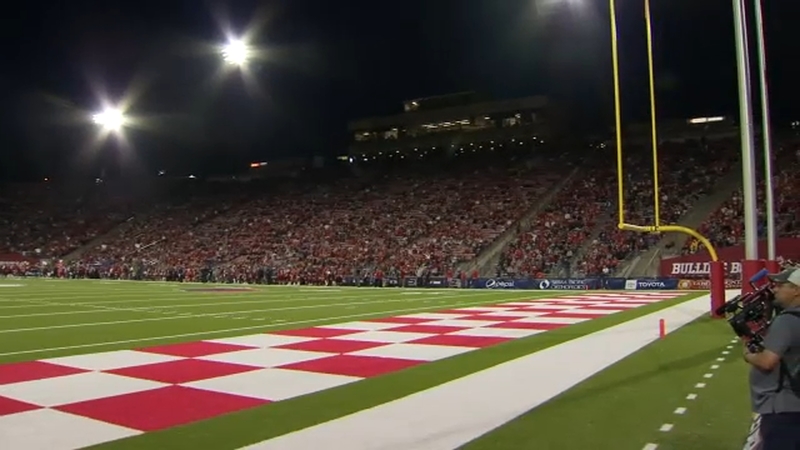 "There's even loftier goals for both programs," Kalen DeBoer said about the rivalry. "Where we're at and what we need to do are at stake here."

For the third time this season, the Bulldogs head on the road to face a ranked opponent (lost to #11 Oregon + beat #13 UCLA).

"I think they're the most complete defense we've faced in terms of their ability to pressure, cover, stop the run," said Dogs' offensive coordinator Ryan Grubb.

The Aztecs enter with the top defense in the conference and fifth best in the country.

"We want to be the best defense on the football field," said defensive coordinator William Inge. "You got to go make it bloody, and this is exactly what playing front seven defense for the Bulldogs is all about."

The last two games, FS has won the turnover battle against Nevada and Wyoming, and Coach Grubb thinks that sets up nicely for the Aztecs.

"Knowing how to attack a defense and still being efficient enough to be on the field but being an attacking mindset," said Grubb.

As much as offense and defense is dissected every week, this time special teams could be the difference.

"He's a difference maker on any team," said DeBoer.

That 'difference maker' is Matt Araiza, the Aztecs punter & kicker who is averaging nearly four yards more than the NCAA record for punt yardage in a season. This weekend against Air Force, he kicked one out of his own end zone for 81 yards.

"You know he just flips the field on you so much. Almost every punt, you just got to expect that you're going to be deep in your own territory," DeBoer said.

Congrats to @matt_araiza for being named the @MountainWest Special Teams Player of the Week for the third time this season (second straight week). #Win22 https://t.co/vSozcazgtc pic.twitter.com/8MpPkQ4oUq

Home games have brought a distinct advantage to the Bulldogs this year.

"You can't help yourself when the lights go off and the whole crowd's going crazy," DeBoer said of the atmosphere Saturday.

The FRESNO - STATE chants across the @FresnoStateFB stadium tonight was epic. pic.twitter.com/KnRLsm7JWG

This week, he's calling on those same fans to overtake the Dignity Health Sports Park. A temporary home for San Diego State in Carson that's seen at best just 41% capacity this season.

"It gives our guys a lot of energy and excitement, I think we're getting used to more and more playing in front of a great atmosphere. Red Wave, we need you. We need you down in Carson," DeBoer said.

Sat.'s game v. #21 San Diego State is at the Dignity Health Sports Park in Carson, a venue that's highest filling this year is 41%.
"We've had a lot of success taking people to the LA area. That would be huge," - @FresnoStateFB coach Kalen DeBoer on FS fans making trip. @ABC30 pic.twitter.com/hMY4bsD5gB

For the third time this season, an FS player has earned Offensive Player of the Week in the Mountain West. Jordan Mims earned that distinction for the first time in his career following a career-high 23 carries for 134 yards and two total touchdowns.

Best game of his career, and he gets the conference honor to go with it‼️@jmims23 is the @MountainWest Offensive Player of the Week🤩

He became the primary ball carrier after an injury to Ronnie Rivers. At Monday's press conference, DeBoer and his staff said Rivers is cleared to practice 'as tolerated' and they hope to have him play against SDSU.

If you're planning on making the trip to Carson, the Department of Public Health in Los Angeles is requiring either proof of vaccination or a negative COVID test within the last 72 hours.