It was the first time in 644 days that fans were inside Bulldog Stadium to watch a FS game.
KFSN
By Stephen Hicks and Brianna Mellon 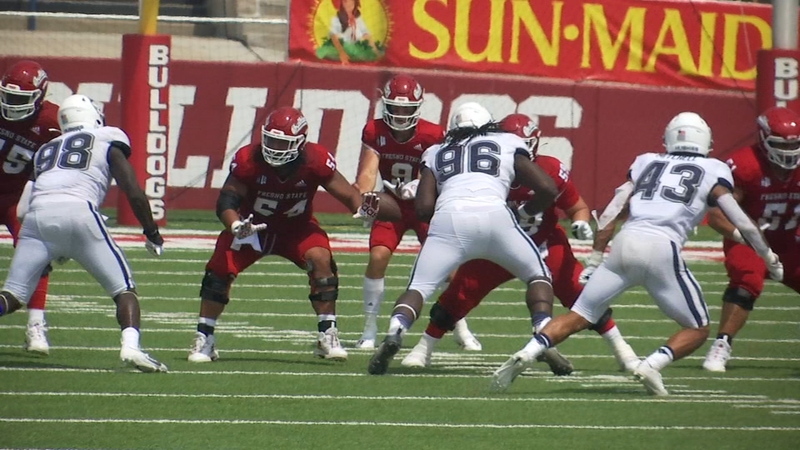 FRESNO, Calif. (KFSN) -- Saturday morning the Fresno State football team kicked off its 100th season in dominating fashion with a 45-0 win over UConn.

"I'd be lying if I didn't say I wasn't probably as fired up and excited as I've ever been going into a college football game," said second year head coach Kalen Deboer. "Just seems like there's been so much leading up to this and then finally it's here. You know even waking up this morning it was just different so I just think it was a special day, special day for our team."

For the first time in 644 days, the @FresnoStateFB team takes the field with fans inside Bulldog Stadium. @ABC30 pic.twitter.com/n8Q2cqRaVN

It was the first meeting between the two schools and the first time in 644 days that fans were inside Bulldog Stadium to watch a FS game (official attendance was 26,043). The 11:00 AM kick was also the earliest in the history of the stadium.

My favorite part about @lilronnie_20's 45th @FresnoStateFB career touchdown. @jakehaener10 screaming "that's a record" at our camera afterwards😂 Love the support from his teammates saying "you did it." pic.twitter.com/9X9rGmQHNA

6th year running back Ronnie Rivers set a program record for career touchdowns scoring his 45th in the second quarter on a 61 yard pass from senior quarterback Jake Haener. That broke the mark previously set by Anthony Daigle in 1993.

"Lot of overwhelming emotions and feelings knowing that this is my last season," Rivers said after the game. "Just to be able to play in front of Bulldog fans again, I know a lot of guys were excited. They really brought the energy so we can't wait 'til next home game when they're out there again."

Jake Haener left the game in the third quarter due to a "full body cramp" from the heat on the turf. The senior quarterback still threw for 20-26, 331 yards and 3 touchdowns. "I thought we did some good things getting the ball into the playmakers hands," Haener said. "They're dangerous dudes and they got an attitude when they're carrying the rock so it's good to see."