After giving up 500 yards of offense, Bulldog defense needs to find an answer before facing Hawaii 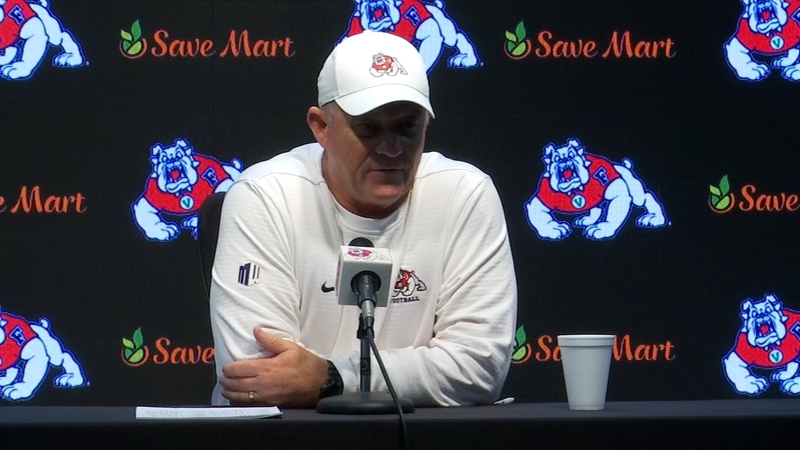 Preview: Bulldogs to face off against Hawaii's strong offense Saturday

FRESNO, Calif. (KFSN) -- The Bulldog defense gave 500 yards of total offense in Saturday's loss to Colorado State. That's more than they gave up when they faced number one Alabama two years ago.

It was a double-overtime loss to Tulsa the last time a Fresno State defense gave up more than 500 yards.

Despite Fresno State's loss last Saturday, their hopes of defending their Mountain West title is still attainable. They'll embark on their longest road trip this season as they play at Hawaii on Saturday. The Rainbow Warriors have the top offense in the league.

The Bulldogs defense will need to step up this week as they face dual-threat quarterback Cole Mcdonald. The redshirt junior ranks fourth in the country for passing yards, touchdowns, and total offense.

"When he broke out on that run against New Mexico, he ran away from everybody he's a gifted guy. Not only is he a very accurate passer, but he's also a big physical guy that you have to get on the ground. He's got speed to take it all the way," head coach Jeff Tedford said in a press conference Monday.

"You can't really focus on one guy because they are very, very balanced. Obviously, like everybody, playing Hawaii you have to figure out a way to slow them down," Tedford said.

While the defense could have their hands full, the Dogs offense will need to do a better job converting. They are 30 for 85 on 3rd down conversions. The Bulldogs will practice Thursday morning and then leave for the Island that afternoon.

"We're going a day early just to get acclimated. It's a long flight. The next day we'll make sure we get up and move around get a short practice on Friday morning as well. Anytime you travel, you have to expect the unexpected," Tedford said.