Fresno Police say Jacob Rangel didn't have enough money to buy all the items he wanted to buy from 53-year-old vendor Jose Rivera, and got upset.
KFSN
By Nathalie Granda 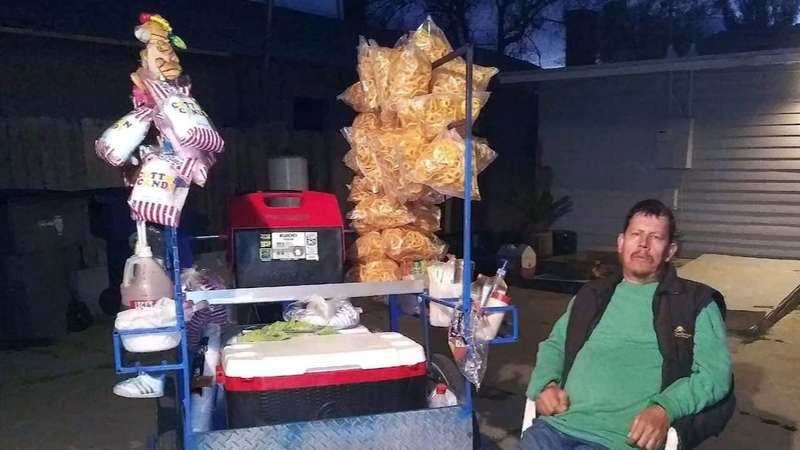 FRESNO, Calif. (KFSN) -- Fresno police have arrested an 18-year-old man in connection to the deadly shooting of a street food vendor that occurred last month.

Authorities say the suspect, Jacob Rangel, had tried to purchase items from 53-year-old Jose Luis Rivera on the afternoon of November 20th.

Fresno Police say this is the 18 year old suspect arrested in connection with the murder of Jose Luis Rivera, the street vendor shot Nov. 20th. Police will be updating with details in a few moments. Tune in the see the press conference live on our website. @ABC30 pic.twitter.com/Xo2VtO9OnM

Fresno Police Chief Andy Hall said Rangel didn't have enough money to buy all the items he wanted to buy, and got upset when he couldn't get everything he wanted.

"Jose Rivera, who is a father and grandfather, he was a good man who was loved by his community. This senseless act of violence shouldn't have happened," Hall said.

They found the suspect, who they say confessed to being involved in a dispute with Rivera earlier that day.

Police also found the gun they believe was used in the shooting.

While the loved ones of Jose Rivera wait for justice, they're still in shock that he will never come home.

Rivera's son remembers his father as a family man who brought joy to others while working as a street vendor.

"He loved working an an 'elotero'. He got to meet people, he got to talk to people," he says. "Knowing police arrested somebody gives us a little bit of peace."

Since the shooting, the community has rallied around the heartbroken family.

Omar 'Super' Huerta, known for his murals across the Central Valley, painted the vendor and spread the word to help the family with expenses.

"I work a lot to make ends meet, just like this man did. It's unexplainable why someone would do this act," he said.

A Valley artist is honoring the food vendor who was shot and killed in southwest Fresno on Friday.

Rivera's son says he hopes city officials will do more to protect vendors like his father.

"Please don't kick them out of public events, of public places. They're just trying to make a living," he said.