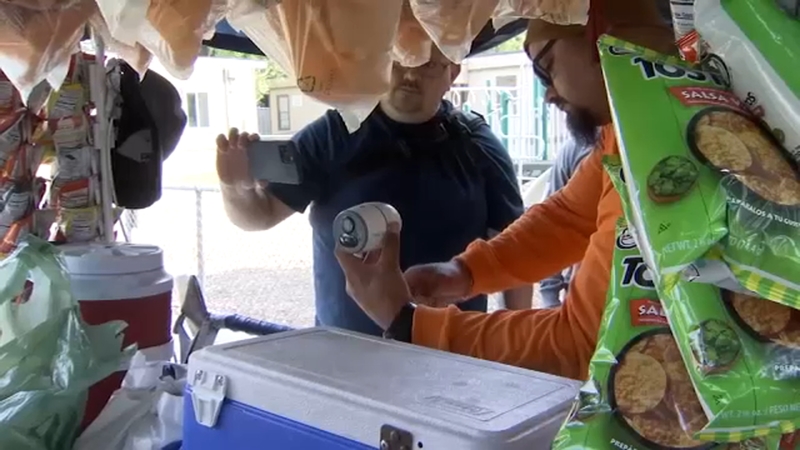 FRESNO, Calif. (KFSN) -- Flowers and gifts will soon appear for sale on Fresno streets as local vendors get ready for the busy Mother's Day weekend. Some sellers will also be equipped with new technology to keep them safe.

Solar-powered surveillance cameras for street vendors are part of the safety solution that Fresno officials hope will deter criminals and catch them in the act if they do strike.

The safety additions come after several violent and even deadly attacks on street vendors in the Central Valley in the past couple of years. The most recent violent attack was on a vendor family on Valentine's Day.

Police say a man stole gifts they were selling, assaulted them and stabbed a 77-year-old grandfather in the hand.

"My grandpa was bleeding, there was blood all over the floor. It also got on the bears," said Kamelia Hernandez.

Police were able to track down the suspect. Fresno City Councilman Luis Chavez says that was only possible because his identity was captured on camera. He hopes the new devices, which have been distributed to 10 local vendors so far, will help.

"The footage is actually automatically uploaded into the cloud. They control it with their handheld device," said Chavez. "Their family members at home have access to the images. They know exactly where they are at, if there is an issue or if someone tries to rob them."

The cameras are free to vendors and made possible through federal small business funding. Chavez says the pilot program has so far been successful. By 2023, all 200 of Fresno's street vendors will have the technology.

"I think it's just peace of mind and more than anything, I think that it helps our food vendors feel a little bit safer," said Chavez. "They are small business owners. They do contribute to our economy. They do have a big impact."

Chavez says he has a message for anyone thinking about harming those who sell on the streets.

"Know that there is a strong chance that there might be some footage," he said. "And if there's footage there, then you are going to get prosecuted to the full extent of the law."
Report a correction or typo
Related topics:
fresnoassaultsecurity
Copyright © 2022 KFSN-TV. All Rights Reserved.
TOP STORIES
Suspect barricaded in Fresno Save Mart after deputy-involved shooting
Over 500 cars damaged in fire at auto facility south of Fresno
2 houses in Merced's Ragsdale Historic District catch fire
Suspect fatally shot by police officer in central Fresno, chief says
Fresno family finds human bone while searching for son's remains
Court doctrine could end case involving homicide in police custody
Clean-up efforts begin on riverbed after fire destroys Madera homes
Show More
Crews clear hazmat incident at Fresno City College
Lindsay woman being investigated for citizenship scam
Clerk pistol-whipped during armed robbery in central Fresno
Body found in downtown Fresno, police investigating
Dine and Dish: Heirloom in northeast Fresno
More TOP STORIES News