Until well into Monday night, police negotiators pleaded with the man to put the gun down.
KFSN 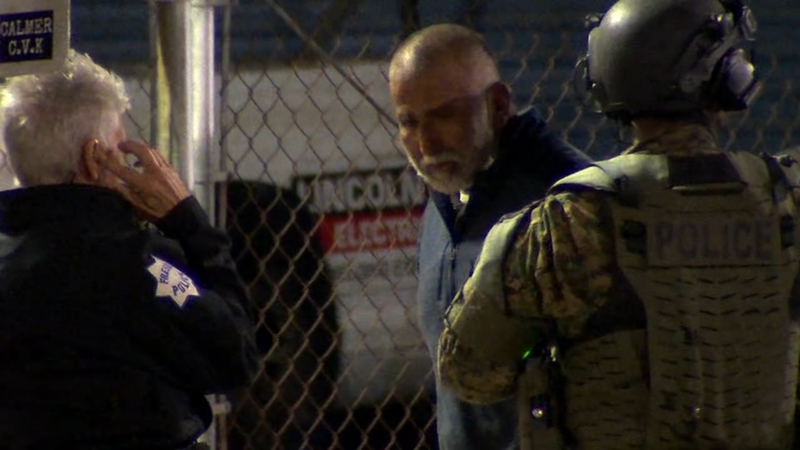 FRESNO, Calif. (KFSN) -- Fresno police have arrested an armed man after negotiating with him for more than 6 hours in downtown Fresno on Monday.

Authorities identified the suspect as Robert Canel on Tuesday morning.

Canel had been outside the Union Bank in the area since late afternoon, holding a short-barrel rifle, forcing nearby businesses to be evacuated.

BREAKING: The suspect was taken into custody by Fresno Police after a six-hour standoff in front of Union Bank on Kern Street. pic.twitter.com/zwviqztS4H

Police say around 4PM, a security officer at the bank reported a man outside the doors with what appeared to be a short barrel rifle.

Officers say when they arrived at the location at Kern and F St, they also noticed what could be an explosive device.

"It appears to be a canister almost similar to an oxygen tank. It's at his feet that he was at times pointing the weapon at," says Lt. Rob Beckwith.

The department's bomb squad was deployed along with a robotic device- on deck to help de-escalate the incident.

Police say Canel's intent still isn't clear. He never made his way inside the bank. Employees and patrons were escorted out safely.

Until well into Monday night, police negotiators pleaded with the man to put the gun down.

They said he had not pointed his weapon at anyone or acted aggressively. In fact, he appeared to be unresponsive.

At Central Fish Co., several Union Bank employees and customers waited out the standoff after they were evacuated safely.

Morgan Doizaki owns the market on Kern and G St. That's where he was when police responded down the street from his business this afternoon.