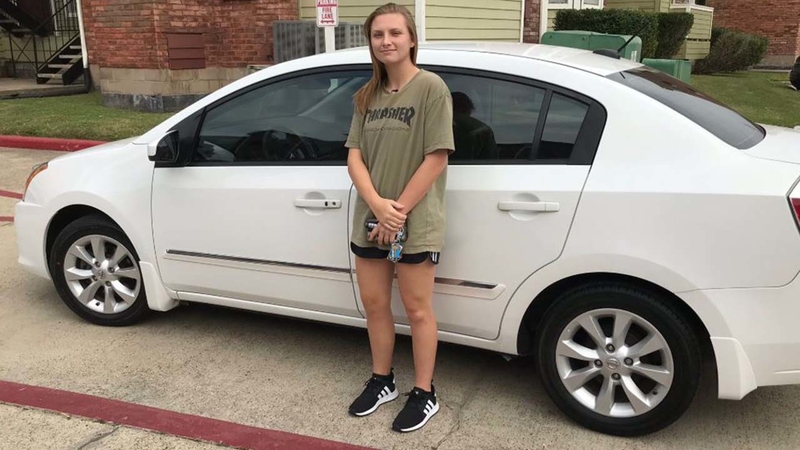 GALVESTON, Texas -- A Galveston, Texas, waitress says she feels like she's in a dream after two strangers she served at breakfast handed her keys to a car by dinner.

‘I FEEL LIKE I’M DREAMING.’ This Galveston woman walked 14 miles to and from work. That all changed after two customers changed her life. After serving the couple, they returned with a car. Watch the perfect pre-Thanksgiving story only on @abc13houston at 6pm. pic.twitter.com/EnUlXxrsKb

Adrianna Edwards works at Denny's and said she walks seven miles to get there.

A Galveston couple learned about Edward's story during breakfast on Tuesday. After hearing she was saving money to buy a car, they decided to do it for her.

The couple, who wished to remain anonymous, went to Classic Galveston Auto Group on Broadway Street and purchased a 2011 Nissan Sentra. Hours later, they returned to Denny's to surprise Edwards.

"She teared up, which made me happy that she was so moved by that," said the woman who bought the car.

The couple gave her the car with no strings attached, but did ask for one thing.

"I gave her a note that said, 'I know it's Thanksgiving, but I said, 'Merry Christmas,' and that, hopefully, someday she'll just pay it forward," the woman said.

It's a request Edwards said she plans to keep. After all, she knows how good it feels to receive an unexpected act of kindness.

Plus, instead of having to walk five hours to and from work, her commute is only a half an hour.