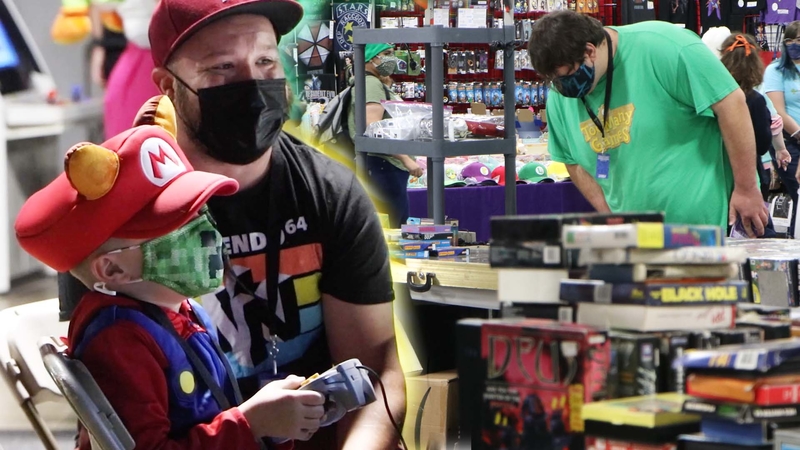 OAKS, Pennsylvania -- "It's great to take a passion and turn it into something you can share with your friends and family," said Ryan Schott. "And that's what TooManyGames is, about taking video games and making them a social experience for everyone."

Schott and his business partner, Paul Truitt, organize the long-running convention, "TooManyGames," alongside their wives. What started as a small retro gaming event and family business has leveled up to become a premiere destination for thousands of video game fans nationwide.

"It's a Philadelphia home-grown thing where everyone's welcome and everyone can have a good time," said Schott.

Pop culture fans have relied on the annual expo for its unique marketplace of rare video games, intricate artwork, and custom apparel. It typically takes place during a weekend in June at the Greater Philadelphia Expo Center in Oaks, Pennsylvania. Unfortunately, more than two years have passed since anyone could experience the fun.

"We were off in 2020, but it's a lot of fun to be back and as big as it had been after a year off," said Schott, who was forced to cancel the event last year due to the COVID-19 pandemic.

He saw it as more of a challenge than a setback. Now, he aims on making the convention even bigger and better. Organizers proudly added more classic games in the open play area, such as Duck Hunt and Street Fighter.

Despite the rescheduled convention's proximity to Halloween, it naturally attracts cosplayers with elaborate outfits resembling their favorite pop culture icons.

"It's one of my favorite cons to go to. I just love being here, I love the atmosphere," said Matthew Jaszyn, who came dressed as King Arthur from Monty Python. "You dress up as a character that you like from, like, a video game or whatever, you meet people, you enter a contest if you want to. It's a lot of fun."

Even when dressed in casual clothes, attendees find TooManyGames to be a cornerstone of common interests where they can fit in.

"When I came and I really was talking to people who like similar things to what I do, I just felt like yeah, I belong here," said Ahmad Orr, a content creator from Maryland.

Vendors operate on a sense of nostalgia when making big sales to longtime video game fans.

He always attended the convention, but this year is the first time his business secured a vending station to sell their wares.

"Probably about 15 grand is what we value this," he said while holding a pristine copy of Pokemon Sapphire version, originally released in North America in 2003.