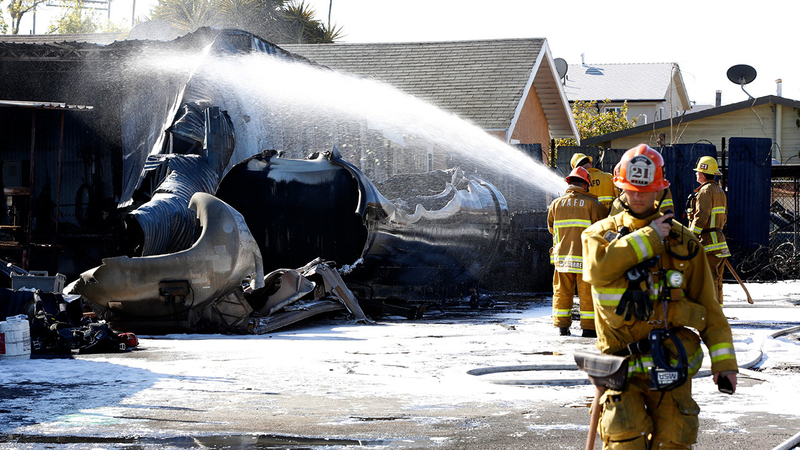 SOUTH LOS ANGELES -- Firefighters responded to a gasoline tank explosion that resulted in two people hospitalized on Sunday morning in South Los Angeles, according to the Los Angeles Fire Department.

The incident occurred on the 200 block of W. Slauson Avenue at approximately 7:45 a.m. after reports of gas in the air. The tank was in a storage yard when it exploded after it had began leaking, resulting in two homes damaged by fire and causing burn injuries to one of the victims hospitalized.

Officials earlier said multiple people were injured with unknown injuries with at least one person suffering from reported breathing problems.

This was an unexpected view as we landed back in LA

Apparently a fire at a refinery last night 😳 pic.twitter.com/eoVvGU3gRT

Flames from the 9,000-gallon tanker spread upon arrival from crews. Gas leaked into storm drains, causing explosions throughout the drains and making the manhole covers blow off.

Images from the scene showed large plumes of smoke rising and towering over the downtown skyline.

About 80 firefighters were on scene working to put out hot spots in the area. Damage by one of the homes affected displaced a family.

No firefighters were injured in the explosion.