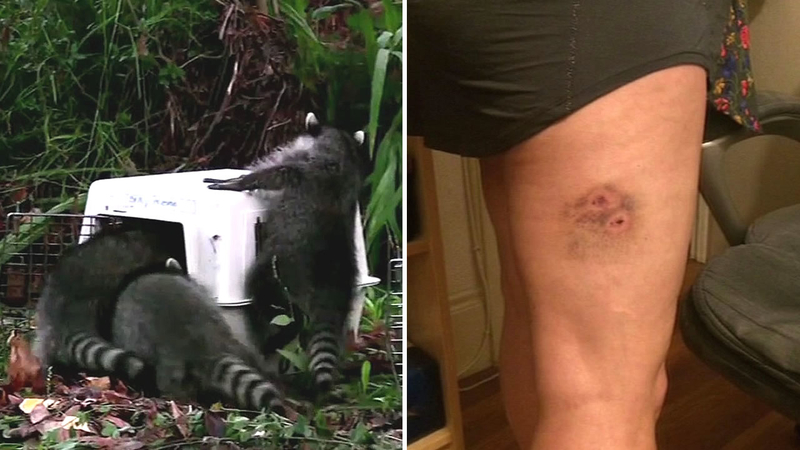 SAN FRANCISCO -- In San Francisco's Richmond District, a couple was attacked they say by a pack of raccoons and if it weren't for a neighbor who came to their rescue, they believe they might have been seriously injured.

Patty Upsavs says she and her husband went out Monday night to let their dog get one last walk and that's when a raccoon pounced.

"So I started swinging the dog around trying to get it off," Upsavs said.

Then a pack of raccoons attacked.

"And then I got another one on my other leg. And so at this point, I'm in the middle of the street and I look up to see, 'Where is my husband? How come he's not helping?' And I look and he's throwing... raccoons are just jumping on him," Upsavs said.

The struggle lasted a few seconds until their neighbor Brian Wong came to their rescue. He ran down the hill with his golf club screaming like crazy. Wong says he used his club to bang on the garbage cans that were left out for trash collection night.

Upsavs suffered several bite wounds and scratches. She and her husband are going through a series of anti-rabies treatments.

Melanie Piazza is an urban wildlife expert at Wild Care in San Rafael. She says people shouldn't be worried about raccoons attacking them because this was very unusual.

"Typically, the only time they're going to come into contact with a problem animal again is if somebody has been hand feeding them and their used to people or if it's a mom defending young and she feels threatened," Piazza explained.

San Francisco Animal Care and Control told ABC7 News trapping the raccoons isn't an option because that is against California law.

Upsavs says her neighbors can probably do more to help get rid of the wild animals. She says she's seen people hand feeding the raccoons often.