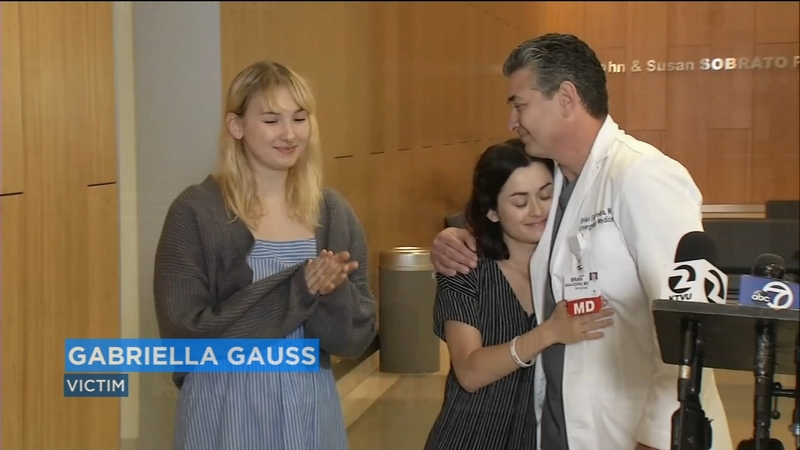 There are still a lot of questions surrounding the horrific shooting in Gilroy.

Detectives say they are still following a number of leads, and needing to speak with several witnesses.

Meanwhile some of the survivors are trying to get their lives back together.
Just days after a deadly mass shooting in Gilroy, two of the victims are going home.

Walking out with their arms linked, they say they're among the lucky ones.

"There hasn't been a moment I've been awake, and not thought about this," says Gabriella Gaus.

They both shared their appreciation for the doctors who took care of them after the shooting.

The two victims were in a bounce house when the shooting broke out.

They started running from the gunman when they realized they had been shot.

"I felt in my back, I thought it was a cramp from running...it wasn't until I saw blood that was the reality," says Brynn Ota Matthews.

The number of people injured has gone up as police now say the 19-year-old shooter, Santino William Legan, injured 16 people.

FBI officials say several of their teams are at the scene following leads, talking to victims, and still trying to determine was caused Legan to open fire.

There are still six victims who remain hospitalized from gunshot wounds from the shooting.

Doctors at Santa Clara Valley Medical Center say they received an outpouring of support from nearby hospitals as patients continued to arrive.
Ota Matthews says she'll always have a painful reminder of that tragic day.

"I'm going to have a bullet in my liver for my whole life. I won't be able to see it or feel it," Matthews says.

But both she and Gauss say it's the doctors and Gilroy community giving them hope as they continue to heal.

FBI agents also have a team looking into social media videos and photos of the shooting.