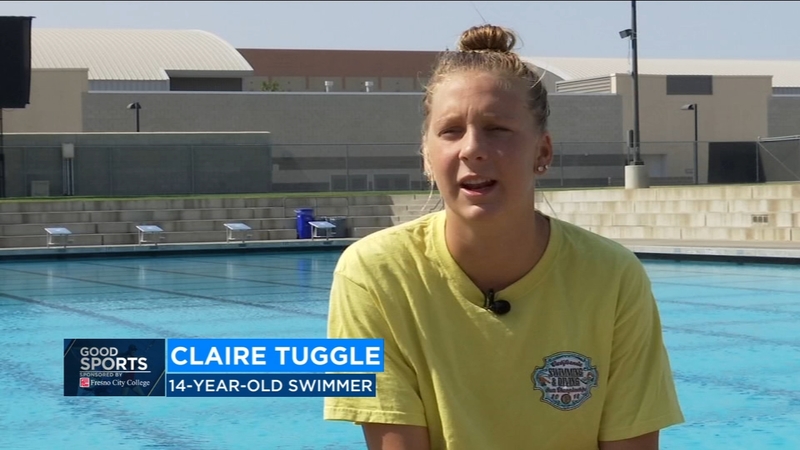 FRESNO, Calif. (KFSN) -- It's hard to call Claire Tuggle a "Freshman Phenom" when she has yet to even take a class at Clovis North.

For now, we will stick with calling the 14-year-old a stupendous swimmer. Clovis Swim Club Coach Mark Bennett said, "For her, I don't think there's a lot of people who can contend with her at the level she's at already coming into high school."

Tuggle has spent her young career a step above her competition.

She has broken 10 national records for her age group. Meaning at age 10, 11 and 12 she was the fastest American swimmer ever. At 14, she is second all-time behind gold medalist Missy Franklin. "It's pretty cool because I've always looked up to her and it's cool to be that close to her," Tuggle said.

Earlier this month she won three events at junior nationals. She called it "a good meet overall."

She will miss the opening week of her freshman year to swim in Fiji for the Junior Pan Pacific team where she will represent team USA.

"I think she has the focus and the determination to want to work harder to achieve higher goals," Bennett said. "I think that's what separates her from people of like or even more talent."

And yes, those higher goals would be to make the Olympics in 2020. "I mean it's just something that I think about. I've had that goal since I was ten probably. That's when it became oh I could probably do that," she said.

Claire practices six days a week to try and reach that lofty dream and is still in love with the sport. "I like that it keeps me in shape. I have a lot of friends on the swim team and I like traveling," she said. "It's like free traveling so that's nice."