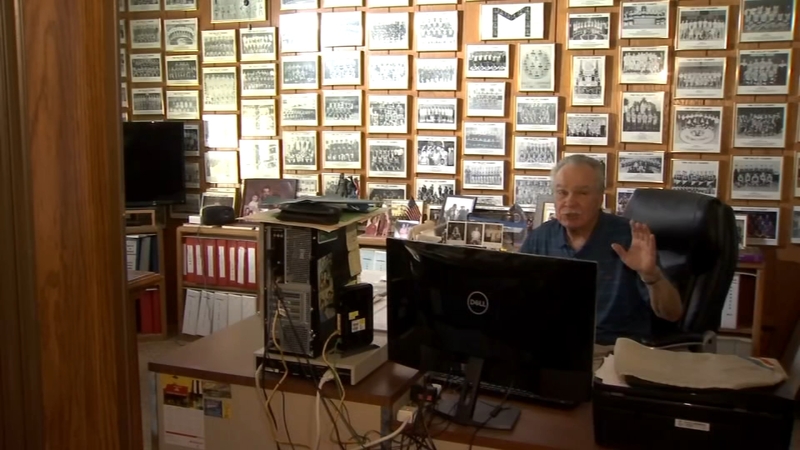 FRESNO, Calif. (KFSN) -- Without hesitation, Bob Barnett will tell you the moment he first fell in love with sports.

"I was 11 years old when my uncle took me to Kearney Bowl to watch Edison play a football game," he said.

Now 75, the Fresno native has been keeping score ever since.

Barnett has not just dedicated his life to local high school athletics -- he's turned his house into a mini Hall of Fame.

Thousands of pictures of past teams and players don the walls of his Central Fresno home.

But it's not just the team photos and newspaper clippings -- Barnett has tracked and recorded just about every noteworthy statistic for every high school sport and league from Bakersfield to the Foothills.

Well-organized rows of three-ring binders full of thousands of carefully crafted handwritten notes and records are just arms reach away.

Barnett got his start as the Central Section's official sports historian while working at the Fresno Bee in the mid-'80s.

Back then, he was researching sports for his alma mater, Edison High School.

"When I was reading I saw all these other players from different schools doing great things," he said. "So after I did Edison, I started expanding to other schools."

While sports were paused during the height of the pandemic -- the hiatus allowed Barnett to focus his attention on this first love -- his wife, Norma, who was battling an aggressive form of cancer before she passed six months ago

Barnett doesn't get paid for the stats he's compiled over the years but his dedication has not gone unnoticed either.

"I've used a number of stats provided by Bob Barnett through the years, but I think the real impact of his work is the legacy of the Central Valley of athletes and coaches and keeping alive those stories, from Selland Arena to the gridiron through the years," says ABC30 Sports Director Stephen Hicks. "That is such a rich history he's helping to preserve."

He was hesitant to say which team or athlete was the best to come out of the Central Section, but Barnett does have his favorites.

"The Fresno High baseball team of 1958, they were 25-1 and considered one of the best teams to ever play in the state of California," he said.