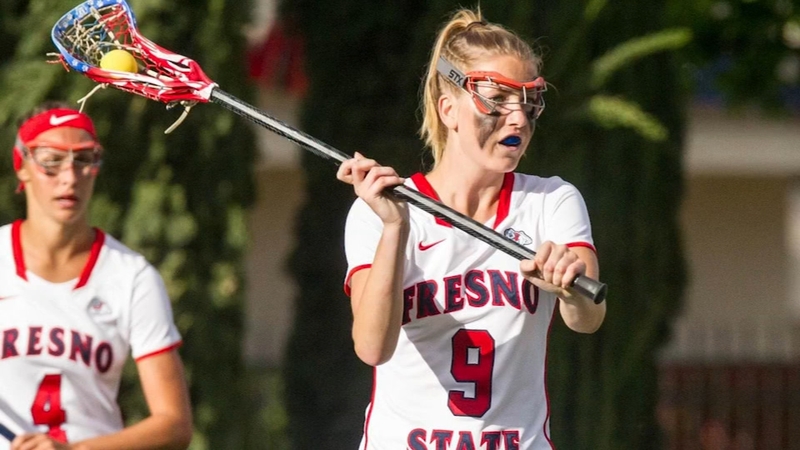 FRESNO, Calif. (KFSN) -- It's been a little more than four months since Fresno State's last athletic competition, but now one of the players who last took the field for the Bulldogs has a chance to make history.

Back on March 12th, just hours after the NBA had suspended its season and the sports dominos had fallen, the Fresno State lacrosse team took the field for an impromptu senior day against Yale.


Tiffiny Wallace was one of the eight Bulldog players honored.

"We were one of the last NCAA games at all in any sport across the whole country so we were really lucky that we got anything," she says.

The senior leaves as the program's all-time leading scorer. But an honor more important to her - that she was a two-time team captain.

"It's a huge honor. It means that your teammates trust you."

This week, she was also one of two Fresno State athletes nominated for the NCAA's prestigious 'Woman of the Year' award.


"When they asked me if I'd accept the nomination I said 'Are you sure you've got the right person?'"

An internship for in South Africa where she helped facilitate after school and life skills programs for underprivileged youth along with a 3.9 GPA would suggest they got the right person.

For two years she was also on the Dogs student-athlete advisory committee.

"It was a lot of discussion and coming up with ideas of what could be best for the student-athletes and how we can get more involved," she says.

After her season ended, Tiffiny also decided to carry on a senior day tradition.


"I didn't want my senior class who I've gone through four years with to miss out."

Using a one-line style of calligraphy, she drew an action shot of each of her teammates and mailed them the picture.

"It was the first one I've done so I don't know if they were actually one line but it looks like it."

While she would have loved to take advantage of the fifth year the NCAA is offering to spring seniors who lost their season, her plan is to go to grad school at Durham University in England who she'll go through an accelerated masters program as well being a player/coach in lacrosse.