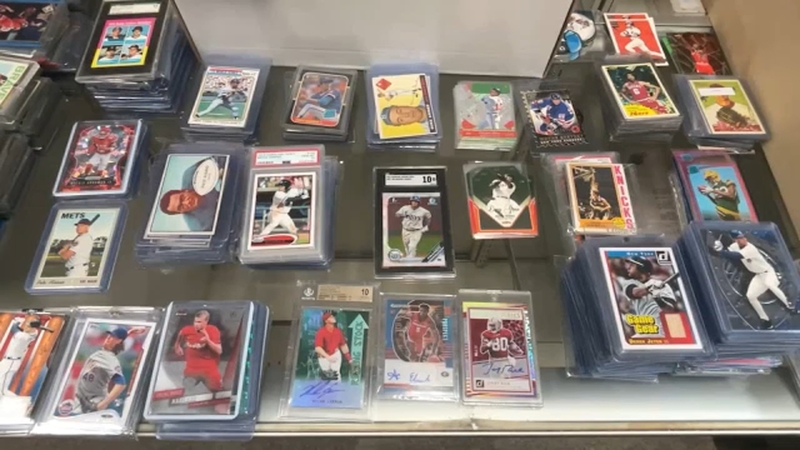 Experts say the industry had been on the upswing in recent years, but the pandemic sent it booming as lockdowns brought back hobbyists while attracting some new ones.

The industry is enjoying perhaps its biggest comeback ever.

"Nothing compares to this. This is the hugest, largest increase ever in pricing in sports card history," said Matt Mossette, owner of Mossette Baseball Cards.

Cards were hot in the late '80s, early '90s and saw another slight uptick in the early 2000s, but no one could've predicted the impact on the industry felt by the pandemic.

Matt Mossette credits stay-at-home orders and shutdowns for the hobby's rebirth -- as card values have spiked to unprecedented levels.

"People had to be at home, so they were going through their collections and maybe watching sports and everything kind of reconnected," he said.

Social media during the pandemic has also played a huge role in the resurgence, but the biggest trend now is taking a "raw" card and getting it graded.

The difference between having a popular card in a plastic sleeve and one graded at mint condition could be hundreds if not thousands of dollars.

"The funny thing grading has been around for 30 years but in the last year and a half that's part of the flip," he said.

Sports cards are not just for kids, Mossette says most of his clients are middle-aged men willing to shell out big bucks for their favorite player or looking to make a quick buck by selling them at a later date.

"You have investment firms, you have Wall Street, you have financial analysts, you have Sillicone Valley money," he said. "It's investing at a high level, it's not just collecting now."

Al Gonzalez is the branch manager at a local mortgage company and admits his investment in trading cards takes up much of his free time.

"I have a natural attraction to the business, however, there is a business side to it. I'm an entrepreneur by heart, so if I can trade something and get something in return, then that's even better."

Gonzalez is just one of the many customers that shuffle through Mossette's shop every week looking to up his collection.