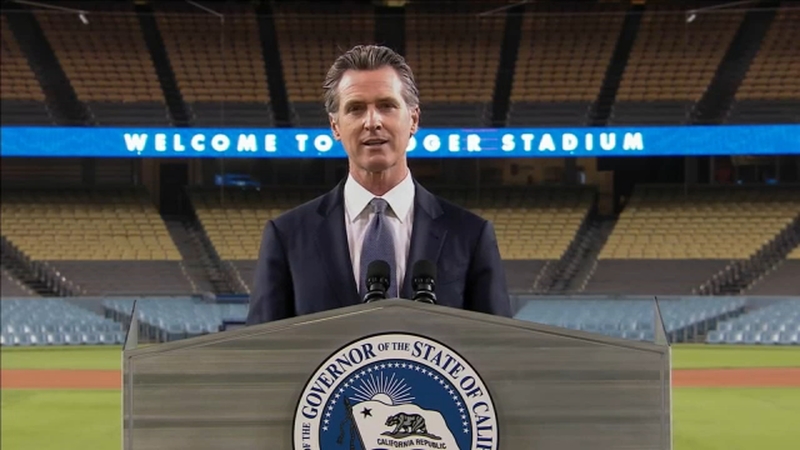 LOS ANGELES -- California on Thursday scheduled a Sept. 14 recall election that could drive Democratic Gov. Gavin Newsom from office, the result of a political uprising largely driven by angst over state coronavirus orders that shuttered schools and businesses and upended life for millions of Californians.

The election in the nation's most populous state will be a marquee contest with national implications, watched closely as a barometer of the public mood heading toward the 2022 elections, when a closely divided Congress again will be in play.

"The new date is Christmas in July for Gavin Newsom and his team. I mean, they have got to be popping the champagne corks today," said Carla Marinucci, senior writer for Politico's California playbook. She says compared to an October or November election, September gives Republicans less time to wage a campaign against Newsom.

The recall election of Gov. Gavin Newsom is poised to be a wild one, with candidates like Caitlyn Jenner and even Randy Quaid throwing their hats in the race. Here's what it takes to run in a California recall election.

"They were looking for months to be able to pound Newsom on his weaknesses, which they think homelessness, crime rising in the cities."

The date was set by Lt. Gov. Eleni Kounalakis, a Democrat, after election officials certified that enough valid petition signatures had been turned in to qualify the election for the ballot.

Kate Larsen: "Eleni Kounalakis is a Democrat. Did that have anything to do with the in theory favorable timing?"

Carla Marinucci: "Well, certainly. She's a big supporter of the governor, she said so from the very beginning that she was on Team Newsom here, and it was her call, she could make it. Legally, she did it as soon as possible. And democrats pointed out to Newsom that he should not wait for November."

Republicans have their own take on the timing.

Anne Hyde Dunsmore is the campaign manage for Rescue California, one of the main recall proponents.

Kate Larsen: "How do you think the timing of the recall date will impact this election?"

Anne Hyde Dunsmore: "I think it's actually going to be a huge problem for him and less of a problem for us."

Dunsmore thinks the Delta variant and election timing with back-to-school could be problematic for Newsom. "I think they were expecting that COVID will be gone, people will forget, and he's home free. People aren't going to forget."

Senior advisor with Stop the Republican Recall, Nathan Click, would not directly say if Gov. Newsom was pleased with the September 14th election day.

Click said their campaign wants to get the recall over with and that they're, "ready to go."

"All of the folks on the Republican side are against climate change, they do not stand for our immigrant communities, and they don't represent our values as Californians," said Click.

The announcement will set off a furious, 10-week burst of campaigning through the California summer, a time when voters typically are ignoring politics to enjoy vacationing, backyard barbecuing and travel.

Many voters have yet to pay attention to the emerging election, while polls have shown Newsom would beat back the effort to remove him. Republicans haven't won a statewide race in heavily Democratic California since 2006.

Newsom's campaign issued a statement describing the election "a naked attempt by Trump Republicans to grab control in California." It called on his supporters to "defend our state." Kevin Faulconer, a former San Diego mayor and one of the leading Republican candidates, predicted that "retirement is coming for Gavin Newsom."

While a final date wasn't set until Thursday, the campaign has been underway for months after it became clear that recall organizers had gathered more than enough of the required 1.5 million petition signatures needed to place the recall on the ballot.

It's not uncommon in California for residents to seek recalls but they rarely get on the ballot - and even fewer succeed. A sitting governor has been ousted just once in the state, when unpopular Democrat Gray Davis was recalled in 2003 and replaced by Republican Arnold Schwarzenegger.

Conservative talk show host Larry Elder, 69, issued a brief statement Wednesday night saying he was seriously considering entering the race and would announce his decision early next week. His entry into the race would give the Republican field a jolt of celebrity sparkle and a name on the ticket known through his nationally syndicated radio show and appearances on Fox News.

Along with Faulconer, other Republicans who have said they will run include Republican businessman John Cox, who was defeated by Newsom in 2018, former U.S. Rep. Doug Ose and reality TV personality and former Olympian Caitlyn Jenner.

The GOP field is expected to continue to grow: Candidates have until 59 days before election to file papers to declare their candidacy, or roughly about two weeks away.

In a recall election, voters would be asked two questions: first, should Newsom be removed, yes or no? If more than 50% vote yes, then question number two comes into play, which is a list of replacement candidates to choose from, of which there are currently dozens. Whoever gets the most votes wins.

Every registered voter will receive a vote by mail ballot, which counties will send out in August.

Tom Del Beccaro, a former head of the state Republican Party who chairs Rescue California, one of the groups promoting the recall, said Elder would help drive up support for the critical first question in his home Los Angeles area, the most populous in the state.

"Statewide races in California are often won or lost in L.A. county," said Del Beccaro, who is not aligned with any candidate. Elder "is going to bring a constituency that is going to help us get a 'yes' on the question No. 1."

Steve Frank, a longtime conservative activist serving as Elder's spokesman, said his entry into the race would become "a major game-changer." People across the political spectrum "know him, and many listen to his show."

Elder, a Black man, also would bring more diversity to the Republican ranks.

Claremont McKenna College political scientist Jack Pitney said Elder's entry into the race would be a setback for Cox because "Elder would appeal to the hard-core Republican, conservative base that would have been Cox's base." Faulconer is considered a GOP moderate.

Pitney doubted Elder's race would play a significant factor, with the Black vote typically running strongly Democratic. Elder "has a reputation for being a provocative conservative, not a champion of African-American interests," Pitney said.

Meanwhile Thursday, the state Finance Department released its final estimate for state and county costs to run the election: $276 million.