Gov. Gavin Newsom sent a word of warning to Californians as we head into flu season.
KFSN 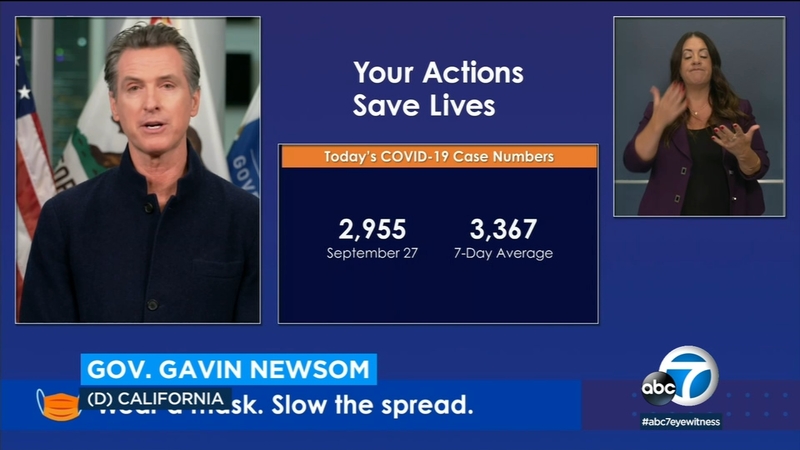 While California's COVID-19 positivity rate has continued to decrease over the last 14 days, and more counties moved into less restrictive levels of the state's four-tiered, color-coded system, Gov. Gavin Newsom sent a word of warning to Californians as we head into flu season.

"By getting a flu shot you protect yourself, and you mitigate the impact of what some have referred to as the "twindemic," potential second wave of COVID-19 transmissions, and the flu happening concurrently, putting pressure on our hospital system," the governor said during a press conference on Monday.

Newsom went as far as to get a flu shot live during his press conference, saying the vaccine was safe and simple.

In a press conference, Governor Gavin Newsom demonstrated how quick and safe it is to get a flu shot as the flu season is right around the corner amid the COVID-19 pandemic.

Last week, California Health and Human Services Secretary Dr. Mark Ghaly warned that there were "early signs" that COVID-19 transmission is on the rise again.

Newsom said that those up-ticks in the R-effective were visible in the Bay Area, Southern California and Kern and San Luis Obispo counties. The effective reproduction number (called R-effective) is the measure of the average number of new infections caused by a single infected individual.

The governor said Californians need to stay vigilant in protecting themselves as we move into the next wave of the coronavirus pandemic, saying 26 other states have already seen an increase in COVID-19 cases.

If we can do everything in our power to mitigate that spread in the course of the next number of weeks number of months, then we can avoid (another round of business shutdowns)," he said.

Another $137 million funding is being allocated to help house California's homeless population during the pandemic, Newsom said.

Meanwhile, California is also heading into the peak of an already historic wildfire season. Eighteen thousand firefighters are currently on the front lines of 27 major fires, including two new blazes that sparked this weekend in Northern California, forcing thousands to evacuate.

Firefighters have gained more control over a rash of wildfires that have been burning in the state, several of which have become some of the largest blazes California's modern history.

Gov. Newsom said the lack of forest management has contributed to the vast amount of wildfires over the last several years. He said he would soon announce more efforts from the state and CAL FIRE to help mitigate massive wildfires in the future.

Governor Gavin Newsom provides an update on wildfires throughout California, including the Glass fire and Zogg fire.