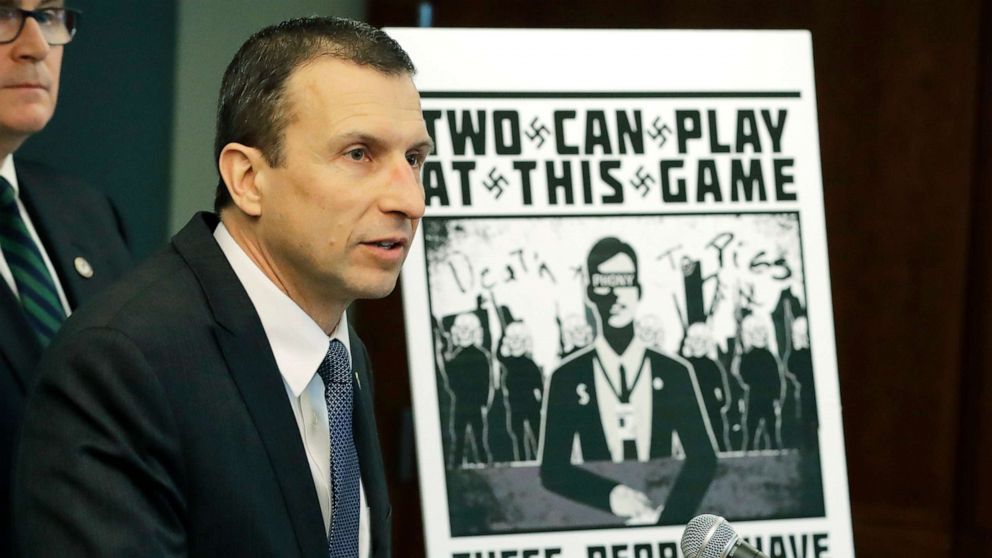 ABCNews
By ALEXANDER MALLIN
The Justice Department on Wednesday announced a series of nationwide arrests of members of the white nationalist group, Atomwaffen, as the FBI steps up its policing of neo-Nazi groups in the U.S.

John Denton, the former leader of the neo-Nazi group Atomwaffen, was arrested n the Eastern District of Virginia for his alleged role in coordinating several "swatting events" that targeted a university, a Baptist church and a news organization, among others.

According to a criminal affidavit, Denton allegedly conspired with others to make prank calls through the encrypted app Mumble in order to trick law enforcement dispatchers into believing Denton's intended targets were in imminent danger of death or causing harm to others, often generating significant emergency responses to unwitting individuals or groups.

"Denton allegedly chose the two targets because he was furious with ProPublica and the investigative journalist for publishing his true identity and discussing his role in Atomwaffen Division," the affidavit says.

In a separate indictment unsealed in the Western District of Washington, four members of the group were arrested in four different states for allegedly targeting journalists and members of the Anti-Defamation League who had outed Atomwaffen's behavior.

"Today we arrested five members of the Atomwaffen Division across four different states. Why I bring that up is I think it's important for you to understand every single person in the FBI is going to work a threat when we have a threat," Jill Sanborn, assistant director, FBI Counterterrorism Division, said at a congressional hearing on anti-Semitism on Wednesday. "We have individuals who were involved in an intimidation campaign, put personalized messages on journalists, members of our Jewish community to intimidate them and potentially act out in violence. And when that happens in those four states every single person in those field offices working that arrest today, whether they're a fugitive agent or a counterintelligence agent, they're working that arrest."

The posters sent to journalists allegedly showed an image of a reporter with a message that read "Two can play at this game," and, "Death to pigs." The men allegedly used encrypted online chat groups to identify journalists they wanted to intimidate.

Shea, one of those arrested, was identified as a high-level member and primary recruiter for Atomwaffen, who coordinated a "Death Valley Hate Camp" in Las Vegas in January 2018, where members of the group "trained in hand-to-hand combat, firearms, and created neo-Nazi propaganda videos and pictures of themselves posing with weapons," according to federal prosecutors.

"The subjects arrested here this morning and the other subjects arrested around the country posed a legitimate and escalating threat to anyone who dared counter or try to expose their activities. These subjects first came to our attention in 2018. They utilized the internet and social media to spread their message and make their plans," FBI Special Agent In Charge Ray Duda said at a press conference Wednesday. "As the group expanded, they participated in military-style training and hate camps."

"Investigating them wasn't easy," he continued. "The subjects took steps to conceal their identities and activities both online and in real life. ... The subjects arrested today crossed the line from protected ideas and speech to illegal acts of intimidation and coercion."

As a part of their harassment operation, one member of the group suggested picking targets on the Society of Professional Journalists online directory. One responded that he had picked out "three targets, and one was Jewish." Garza, identified in the indictment, wrote back that he "had found a leader of a 'association of black journalists' in his state."

Cole, one of the Atomwaffen members charged Wednesday, also suggested the group could buy "rag dolls and knives" so the group would leave "a doll knifed through the head at their target locations."

One of the reasons the group sought to target journalists in particular is because they were particularly incensed about ProPublica/PBS' "Documenting Hate" series, where Cole was identified as an Atomwaffen member. Cole, in a recorded message to Atomwaffen's leadership, said as a response to the story, "The matter of these nosy reporters coming into our daily lives, where we work, where we live, where we go in our spare time. We must simply approach them with nothing but pure aggression ... We cannot let them think they are safe in our very presence alone."

Separately from the arrests, Sam Woodward was identified as an alleged member of Atomwaffen who was supposed to attend the Death Valley Hate Camp before being arrested for the high-profile murder of openly gay college student Blaze Bernstein, authorities said in the indictment.