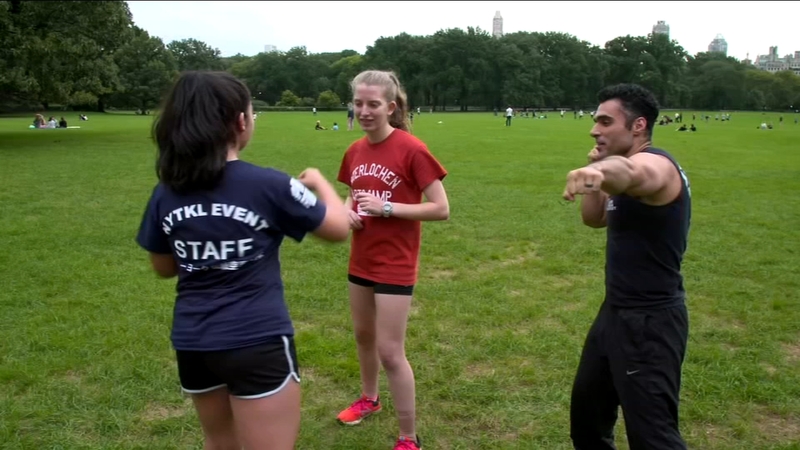 WASHINGTON D.C. -- Groups at our nation's capital are paying tribute to the jogger who was stabbed to death earlier this week.

A large crowd gathered last night in the Logan Circle neighborhood to remember the life of Wendy Martinez.

The vigil took place a few blocks from where the 35-year-old was killed while jogging Tuesday night.

She was recently engaged to be married.

Police arrested 23-year-old Anthony Crawford for the attack. They say he has a history of mental illness and drug abuse. Authorities consider the murder a random act.

The recent murder has sparked concern among women about safety while our exercising.

Runners across the country are banding together and showing they are not afraid. They are also learning how to protect themselves.

"When you train for certain situations if you come across them then you are limiting that aspect of fear. It created real confidence and that confidence is something that exudes outwards," said Matan Gavish, founder of Krav Maga Academy and Fit Hit.

Matan Gavish is the founder of a self-defense school in New York. He's trained navy seals, army rangers and even moms.

"Never worry about offending another person's feelings when it comes to your safety," Gavish said.

Matan ran through a litany of self-defense tips to stay safe including a different way to hold keys.

"A better way to use a key for self-defense is to hold it like this where it's pointing from the bottom. Nothing that can cut through the skin. Way better grip on it. And then you can use it call this a Hammerfest motion," Gavish said.

Heavy water bottles can also be used as a diversion.

If an attacker gets too close Matan said to aim for the eyes and the groin.