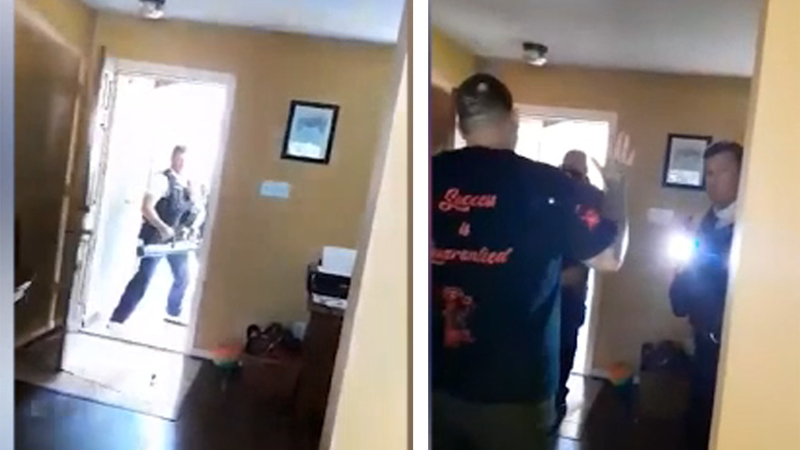 HOUSTON, Texas -- A retired Texas officer is calling deputies' response unprofessional and intimidating after they broke down his front door to serve a warrant. The problem though, they were not at the correct house.

Video of what happened to Louis Rodriguez and his family on Sept. 1 shows the Harris County Sheriff's Office deputies at the door trying to serve a warrant.

Rodriguez said it all happened so fast, his family was startled. Rodriguez said when he first looked out his window and heard the commotion he didn't know what to think. It was a chaotic situation.

"Out of control yelling, demanding, threatening they wanted to come in. I wasn't sure they were police officers at the time," Rodriguez said.

Rodriguez said he yelled out he was a retired officer and he wanted to see the warrant.

"Sir, you have the wrong house," yelled out Rodriguez's son in the video.

However, within minutes, the deputies bust the door open and the family was taken outside.

"(They) manhandled myself and my son and brought us outside. (Then) they finally realized the mistake they made," Rodriguez said.

Deputies attempting to execute an arrest warrant on Sept. 1 mistakenly approached the wrong home in the 21100 block of Royal Villa Drive and damaged the front door. Deputies subsequently realized they made a mistake and the sheriff's office arranged to have the door replaced. The sheriff's office regrets the mistake and the incident is under review.

A captain on scene that day did apologize to the family.

"That apology didn't suffice for me," Rodriguez said.

Rodriguez said he's glad nothing major happened, but he can't help to think it could have taken a different turn.

"That played on my mind. That's another reason I was afraid," Rodriguez said.

He's now looking for a lawyer and hoping to file a complaint with the Harris County Sheriff's Office.