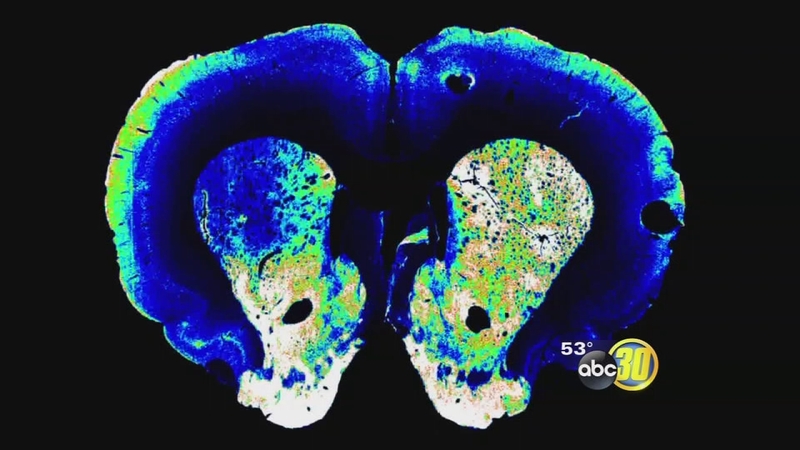 PITTSBURGH (KFSN) -- As many as one million Americans are living with Parkinson's disease, a progressive movement disorder with no cure. Medications may help control the symptoms for a period of time, but eventually, they lose their punch. Researchers now say they've found a way to prevent Parkinson's from developing in animals, a huge step toward eliminating the disease in people.

Fifty-two-year-old Luanne Radermacher starts and ends every day by stretching and loosening her lean frame. For her, it's the best way to fight the disease attacking her body.

Radermacher told Ivanhoe, "My goal is to stave it off as long as possible."

Luanne was just 44 and a new mom when doctors diagnosed her with Parkinson's disease.

"I took my husband and my 18-month-old at the time with me, to the appointment. I wanted to show her, this is the goal. This is an 18-month-old son. I love him dearly; I want to be active for him," she explained.

Edward Burton, MD, FRCP, Associate Professor of Neurology at the University of Pittsburgh School of Medicine is among a team of researchers working on a way to slow down the progression of the disease.

Using gene therapy in rats, researchers engineered a reduction in a protein in the brain known as alpha-synuclein. Researchers suspect that it has a role in the development of Parkinson's.

Dr. Burton told Ivanhoe, "It's quite possible that knocking down the protein by 30 to 40 percent will prevent Parkinson's from progressing, for example."

Dr. Burton says the finding could lead to new drugs to protect the brain from neurodegeneration.

"I think that this is another key piece in the puzzle that will eventually enable us to collectively, as a field, have effective treatments for Parkinson's," Dr. Burton explained.

Radermacher said, "I think the research is important because it gives hope. And with a disease like Parkinson's you need hope."

Dr. Burton says a clinical trial of gene therapy in humans is only two to three years away. He says the therapy needs to be tested in other animals and researchers need to assess the long-term effects before it could move to human trial.