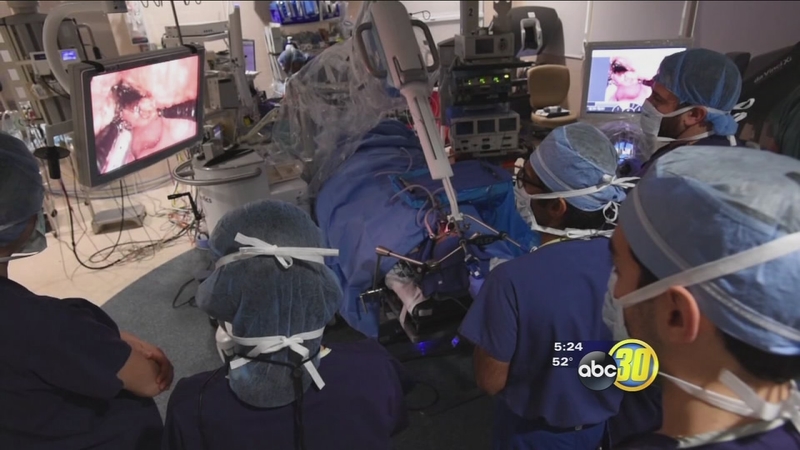 PITTSBURGH, Pa. (KFSN) -- Head and neck cancers are on the rise with as many as 25,000 Americans diagnosed every year. For the first time in the United States, a revolutionary robotic snake is giving surgeons a minimally invasive way to perform delicate, life-saving procedures.

Mike Yetzer and his girlfriend Juli Padasak were in the middle of flipping an old house last summer when Yetzer's health took a sudden turn. Surgery for throat cancer three years ago left his voice weak, but suddenly, he couldn't breathe.

Yetzer told Ivanhoe, "My options at this point, were to cut my throat, or a trach, which I wasn't excited about."

"It was scary. We had a lot of episodes of choking," detailed Padasak.

Doctors say a non-cancerous growth was blocking about 30 percent of Yetzer's airway. Head and neck surgeon and robotic specialist doctor at UPMC, Umamaheswar Duvvuri, M.D., thought Yetzer would be a perfect candidate for a new flexible robotic probe.

"Humans aren't a straight line. Our mouth isn't directly connected to the back of our throat, our voice box, our larynx, our esophagus," explained Dr. Duvvuri.

Surgeons insert the robot into the patient's mouth. Moving like a snake, it can navigate almost 180 degrees.

Dr. Duvvuri said, "By using a computerized console, which is connected to the system, we can drive this camera through the mouth and into different parts of the anatomy."

"They called me to work, so I went," said Yetzer, who is happy to be back on his feet and getting stronger every day.

Yetzer said his doctors tell him he should regain most of his voice, but it has been slow. The US Food and Drug Administration approved the flexible robot at the end of 2015. So far, the advanced robotic system is only cleared for use in head and neck surgeries although doctors say it could be useful in cardiac cases, among other things.