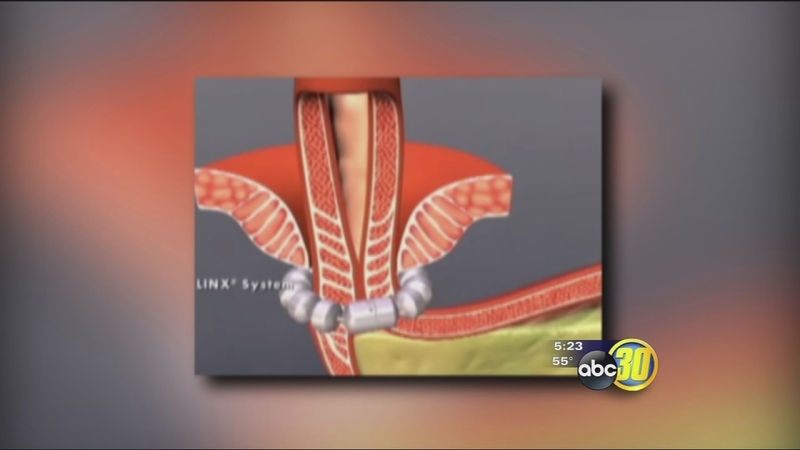 SAN ANTONIO, Texas. (KFSN) -- If you know anyone who suffers from acid reflux symptoms, you know all they want is relief. Now it looks like a new surgery can ease the burn, as well as save lives.

Steven Huth told Ivanhoe, "And now the heartburn is gone."

For decades, that wasn't the case for Huth. Acid reflux stole much of his quality of life before surgery brought relief. "I can eat anything now," he said.

Steven was fitted with the Linx. It's a small string of magnetic beads that wraps around the esophagus, letting food pass, but keeping dangerous stomach acid in the stomach.

The laparoscopic procedure immediately and permanently relieves acid reflux problems. That's important, because ongoing acid reflux can erupt into much more serious problems if acid stays in contact with the esophagus. Leah Dill, D.O., Surgeon at Southwest General Hospital in San Antonio, Texas said, "And that long-standing irritation can actually lead to pre-cancerous changes of the esophagus called Barrett's esophagitis."

While many people use proton pump inhibitors like Nexium, they're not supposed to be used for more than six months. "We're really starting to see that there's a lot of damaging effects from taking acid medications long-term," Dr. Dill explained.

When these PPI drugs are taken longer, "What that's been shown to do is alter the bacteria content in the gut, and it can cause some bacteria overgrowth syndromes. They've seen a risk of osteoporosis-related fractures due to decreased mineral absorption after taking these medications," Dr. Dill said.

Drugs like Nexium used to be prescription only, but since they're now sold over the counter, more people are able to mask their symptoms without a trip to the doctor.

Dr. Dill told Ivanhoe, "Now that people are able to self-medicate a little bit easier, we may be missing some of these patients who may then progress to esophageal adenocarcinomas."

Which is one more worry Steve Huth doesn't have to live with anymore.

The Linx is a permanent solution for people with body mass indexes of less than 35. And right now, Medicare covers the cost in most cases, but some private insurance companies do not.