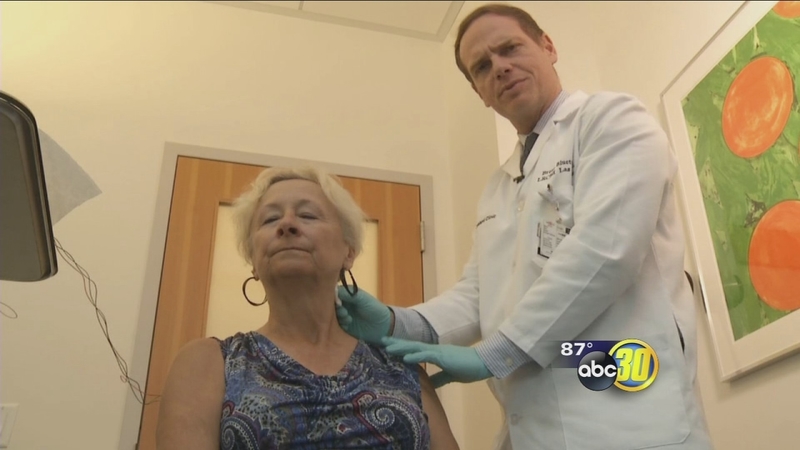 LAS VEGAS, Nev. (KFSN) -- Long before it wiped out worry lines and age wrinkles, Botox was originally created to stop muscle spasms in the eye. Besides its fountain-of-youth qualities, it's being used to relieve exhausting and sometimes debilitating effects of a neurological disorder called dystonia.

There is a doctor in Las Vegas making the procedure even more precise.

Char and John Lacenski took some time to admire Peter Alexander's glass sculpture "sugar" after their two-hour drive to Las Vegas. They came to the Cleveland Clinic Lou Ruvo center for brain health so Char can get her Botox.

Char has dystonia, it's a neurological condition suffered by 300,000 Americans. Her neck muscles misfire causing spasms and this tremor.

Movement disorder specialist at the Cleveland Clinic Las Vegas Lou Ruvo Center for Brain Health, Brent Bluett, DO, said, "Some people have problems with their neck; they can have abnormal posturing where their neck is turned. Some people have more extreme symptoms where the limbs are actually distorted. It's very painful."

Bluett gives Char six shots of Botox in her neck and shoulder muscles to relax them. He also uses this electromyelogram to pinpoint where to give the injections. The meter sounds like this when he touches the tense muscle.

Char told Ivanhoe, "You feel much better afterward. Once it starts kicking in, like I said, my head doesn't have a tendency to move to the right as much as it does if I don't have the shots given."

It takes a few days for the Botox to take effect, and Char will have to come back in about three months when it wears off. Doctor Bluett says the treatment can temporarily cause flu-like symptoms or pain when swallowing, which is why he starts with a low dose and slowly increases it until it works. Char encourages other dystonia patients to talk with their doctors to see if it will work for them like it has for her, for 20 years and counting.

Doctor Bluett says when Botox is combined with physical therapy, the results are even better. Insurance usually pays for treatment because it's an effective way to relieve symptoms and is FDA approved.
Related topics:
health & fitnesshealth watch
Copyright © 2021 KFSN-TV. All Rights Reserved.
HEALTH WATCH