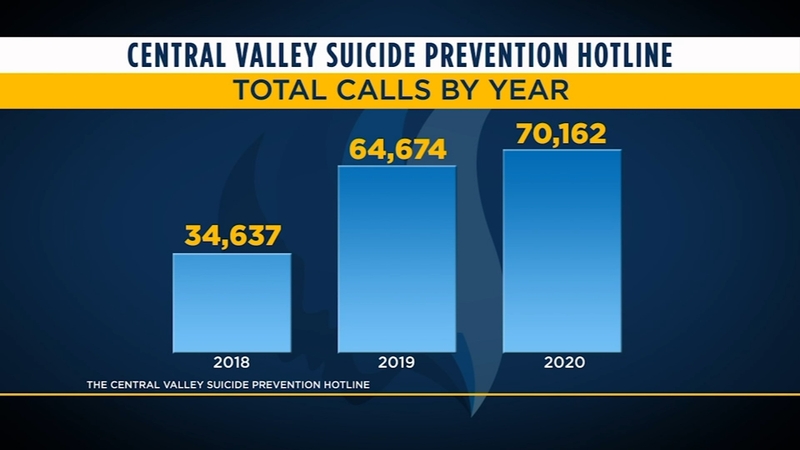 FRESNO, Calif. (KFSN) -- If you or someone you know is in emotional distress or considering suicide, call the National Suicide Prevention Lifeline at 1-800-273-TALK (8255).

The pandemic has taken a toll on many people's mental health.

Since it began, calls to the Central Valley Suicide Prevention Hotline have gone up nearly 103 percent.

Manpreet Kaur has been answering the phones for the last ten months. The call to help those on the other end of the line was clear after several kids approached her about suicide.

"I didn't know how to tell them anything. I didn't know if I could say anything at all. Then it became either I learn more about it and do something about it, or I can just keep going along the same direction and not know how to speak to these kids," Kaur said.

The call center is equipped with trained professionals and volunteers ready to help share life-saving resources 24/7. It's free and confidential.

"When people think of National Suicide Prevention line, they think that somebody is going to come to their house, take them to the hospital, and they're going to be held there for a certain number of hours," Kaur said.

According to Kaur, most calls don't require contacting emergency services.

"Our main job is to pull you out of that moment you're having," she said.

Amanda Nugent Divine is the CEO of Kings View in Fresno which runs the suicide hotline.

She describes the issues during calls in the last year as "complex" and "multi-layered" due to the extra stresses of the pandemic. In addition to the spike in calls, the center has also seen an increase in the length of time it takes to complete a call because of that complexity.

"Whereas it used to take maybe 30 minutes, their calls are now up to 40 and 50 minutes," said Nugent Divine.

The Kings View Central Valley Suicide Prevention Hotline program says we've yet to see the "full fallout" of the pandemic. Suicide rates have dropped slightly in the Central Valley, but they expect that will increase again about 18-24 months from now.

"Things like the pandemic, crises that upend our life, that changed the way we live, and the way we function, the way we cope, can create PTSD symptoms so we're on the lookout and we're here," said Nugent Divine.